The Guardian: Children Forced to Beg or Work As Hunger Eclipses Fear of Covid-19 in Yemen 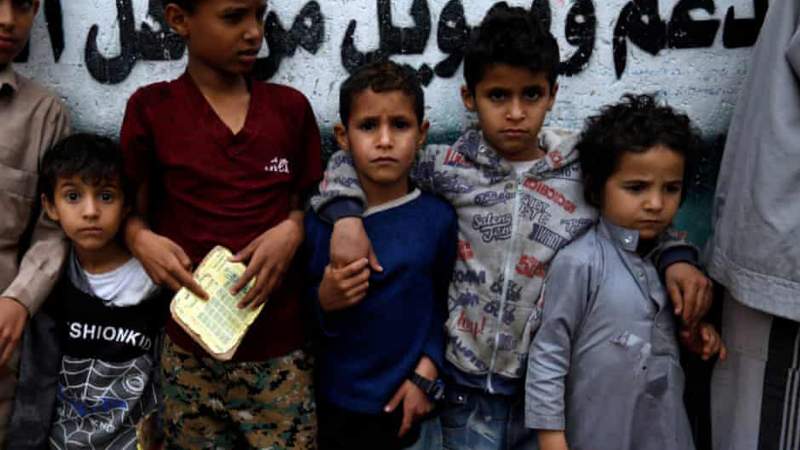 Families in Yemen are having to send their children out to work and to beg as concerns mount over rising food, water and petrol prices, a survey has found.

A Story in a Picture

Families in Yemen are having to send their children out to work and to beg as concerns mount over rising food, water and petrol prices, a survey has found.

Despite coronavirus spreading undetected across the war-ravaged nation, data collected from more than 150 households in three provinces of southern Yemen found that respondents were more worried about going hungry than contracting Covid-19. The International Rescue Committee (IRC), which led the survey, found nearly two-thirds (62%) of respondents reported being unable to afford food and drinking water. Prices for sugar and vegetable oil have jumped by more than 25% in the past year.

Food insecurity is a major concern in Yemen, where a resurgence in fighting, coupled with decreased humanitarian funding and access, has left millions at risk. An estimated 3.2 million people – 40% of the population – are currently facing acute food insecurity, and almost half of all Yemeni children under five will be malnourished by the end of 2020. Food rations for north Yemen have already been cut in half since April, and an additional 5m people will lose access to food assistance in November without more funding, says the IRC.

“The nightmare Yemenis are living through continues to get worse with each passing day,” said Tamuna Sabadze, IRC’s Yemen country director.

“With Covid-19 spreading unchecked, dwindling humanitarian funding, and increasing fighting and airstrikes, Yemen is experiencing a triple emergency. This survey brings to life the terrible economic impacts Covid-19 is having on the lives of the world’s most vulnerable.

“In order to feed their families, respondents indicated they have had to take on debts which they can’t afford to repay, reduce the amount of food they are consuming, sell off assets like land or livestock, and some have even had to send their children to work or to beg,” Sabadze said.

Although to date fewer than 1,900 Covid-19 cases have been officially recorded, the true figure is likely to be considerably higher due to underreporting and a lack of testing.

Marcus Skinner, senior policy adviser at IRC, said the food price hikes caused by Covid-19 were having a major impact in Yemen because roughly 85% of all food is imported. Families were redirecting funds away from education and healthcare simply in order to eat, he added.

“We’re seeing an increase in child marriage and in child begging as a response to the lack of food, and we know that families are reducing the number of meals they’re eating,” said Skinner.

“But the most shocking finding for us was that in the southern governorates, particularly in Aden, where coronavirus has run unchecked – hospitals have been overrun, graveyards are overflowing - the main concern was the deterioration of the economy and the impact that is having on food security.

“Fear of ill-health, including Covid-19, has been usurped by hunger.”

The IRC is calling on the UN to increase humanitarian funding to the country and for the US, UK and France to end military and intelligence support to parties involved in the conflict.