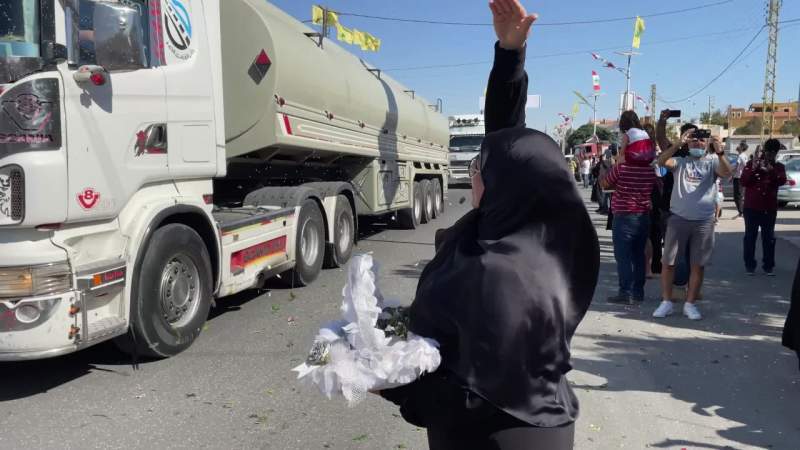 Middle East: As the Iranian fuel convoy arrived in the southern suburb of Beirut, amid popular celebrations along its way from the Syrian port of Baniyas, the Lebanese media revealed an urgent and sudden departure of the Saudi ambassador, Walid al-Bukhari.

The departure of the Saudi ambassador expresses the great and unexpected failure suffered by the US, the West and its regional tools, including Israel. It showed the defeat of these regimes in the face of Hezbollah.
The economic war on Lebanon quickly collapsed and was destroyed by those who imposed it to try to achieve as many gains as possible, by facilitating the import of Egyptian gas. The US had put obstacles on  importing Egyptian gas, and then it raised them today because of the pressure of Hezbollah.
The Lebanese popular reception for the first Iranian fuel convoy was amid joy and celebration after an urgent need because of a severe man-made crisis and an economic blockade imposed by Washington and its allies. The crisis was made to hurt the Lebanese people and resistance, however, its arrival reflects a strategic shift in the region.
Despite Washington vowing to prevent Iran from selling fuel and that it will target Iranian fuel tankers, it did not dare to do so in the face of an Iranian tankers with the protection of Hezbollah that sailed and publicly transported its cargo to Lebanon.
It was thought that Sayyed Hassan Nasrallah’s talks about importing fuel from Iran, and confronting the US blockade, were merely threats to bring about a solution to the government file and to relieve pressure on Hezbollah and the environment of the resistance. Nevertheless, the launch of the Iranian tanker from the first moment upset all equations, especially its safe passage without being harmed in light of the flare-up of the sea confrontation between Iran and the entity of the Zionist enemy.
In this regard, the Zionist media said that "Israel" found itself not given the choice not to target the tanker because it does not want a confrontation with Iran or Hezbollah.
The enemy government implicitly acknowledged that Hezbollah succeeded in overcoming the difficult test that was placed before it by Washington and its allies in the region and their tools inside Lebanon. It turned all the results in its favor today, enjoying a great popularity, and became a source of confidence for all the Lebanese.
Yemen cheered in breaking the economic siege on Lebanon. It is facing a fierce economic war by the US-Saudi aggression, and its people know the bitterness and pain that the Lebanese people have suffered because they are still experiencing more than this suffering.
From this point of view, the economic victory of Hezbollah is considered by the observers as a great morale motive for the Yemeni negotiator and the Yemeni leadership in the possibility of breaking the siege soon. Yemen can celebrate as the Lebanese celebrated the convoy of dignity as they called it, when fuel tankers are not detained anymore and entered through the port of Hodeidah and medicines entered through Sanaa international airport without restrictions.
#Economic_Crisis #Hezbollah #Iranian Fuel Shipments 21-09-26