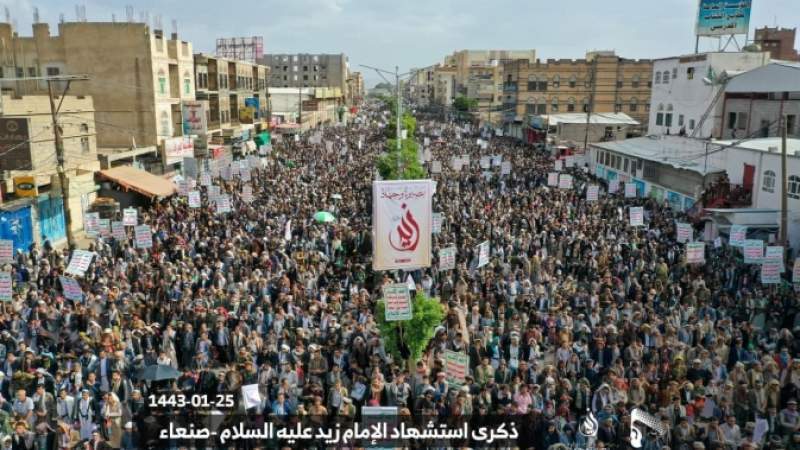 Yemen: During the past weeks, the free Yemeni governorates have commemorated the martyrdom of Imam Zaid, peace be upon him. The revolution of Imam Zaid has lessons from which revolutions learn to fight against corrupt regimes or to combat injustice over the past decades, even national revolutions present the same principles that Imam Zaid’s revolution raised more than a thousand years ago.

Yemen’s steadfastness in the face of the US hegemony preceded the aggression that was launched on March 26, 2015. The US succeeded in transforming the demands of many revolutions in the Arab world that began in 2011 into living demands, and by changing the faces in its client regimes with others. It was able to return to hegemony again, the confiscation of the peoples’ decision and their rule and their humiliation again, as we see in a number of Arab countries in which those revolutions took place.
The success of the US in this is due to the lack of awareness of the people, or the lack of insight and the clear goals of those who carried it out, or the protective environment for the revolution. Revolutions of many Arab countries were changed and replaced with regimes that are worse than the regimes against which peoples revolted.

In Sana’a, the US, despite its capabilities and the multiplicity of faces of their agents, was unable to destroy the February 2011 revolution. This is due to awareness and insight of the leader of the revolution, Sayyed Abdulmalik Al-Houthi and the people that adheres to the principles of Imam Zaid, peace be upon him.

Imam Zaid’s well-known sentence in the face of all opponents of his revolution was “the Quran does not allow me to remain silent when you are governed by tyranny.” Imam Zaid established his approach of fighting the oppressors with all capabilities, and not to be weak or tolerant slendering the power of the enemy and others.

During the 2011 revolution, Ansarullah confronted the attempts to distort the revolution by the tools of the Americans, led by the Islah Party, which publicly announced being working for the US in 2015. This defense culminated in the revolution on September 21st, 2014. In this revolution the rest of the American tools were forced by the American embassy to leave, along with all the embassies associated with it from Sanaa.
On the eve of March 26, 2015, all indications were telling the impossibility of Yemeni steadfastness in the face of an international coalition that had huge weapons in quantity and quality. The coalition has the latest war techniques in the world, and huge funds to spend on the war, in addition to the exposure of all the military secrets as a result of previous domination of mercenaries over all the army and military power sites. On the other hand the revolution that inherited a destitute country burdened with poverty and debts.
The decision taken by the leader Abdulmalik Al-Houthi at that time to confront the aggression was based primarily on the Imam Zaid school which he followed. Imam Zaid school establishes confrontation, non-compromise and negligence of the tyrants when they attack or establish control over any country.
The decision to confront, despite the great repercussions for it, was the beginning of the victory as for 7 years Sana’a has remained steadfast, achieving major victories and greater disappointments for the US-Saudi alliance that thought that it would control the capital, Sana'a, within two weeks.
Sana’a at the end of the seventh year of the aggression, changed the battle in its favor in the political and military fields. The US acknowledgement of the inability to return to dominance of Sana'a as it was in the past, in addition to the great awareness that was manifested and grew in the steadfastness of its people in the face of aggression and throughout the years of confrontation and steadfastness.
The worst was over after a decade of the American tampering culminated in the continuous aggression and siege. A bitter period of security chaos and instability that prevailed in Sana’a has ended, which were the years preceding the revolution of September 21, 2014. Sana'a nowadays, despite the aggression, its people enjoy peace and security because of its right to defense and achieve freedom and independence.
#US_Saudi_Aggression #Imam_Zaid 21-09-26