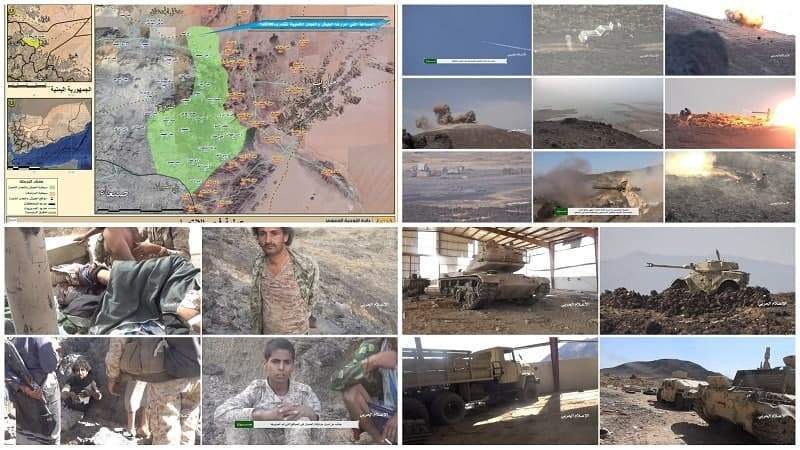 News - Yemen: The Yemeni Armed Forces announced Tuesday the liberation of large areas from Sirwah to the outskirts of the city of Marib in the Fajr Al-Entesar "Dawn of Victory" operation, with an area estimated at 600 square kilometers.

The Armed Forces spokesman, Brigadier-General Yahya Saree, said that the US-Saudi warplanes launched 948 raids, targeting citizens' homes and public roads, stressing that the intensification of the aggression's raids did not deter the Armed Forces from continuing to carry out operational tasks according to the plan until achieving all its goals.

He pointed out that during the battle, the air defense shot down 6 warplanes, including US-made warplanes, it also shot down 11 spy drones and carried out more than 518 repelling operations, forcing the US-Saudi mercenaries to leave. The air defense operations contributed to confusing the enemy, thwarting many US-Saudi aerial operations.

He added: "Approximately 300 armored vehicles, and troop carriers, 850 weapons, and four weapons depots, were damaged, destroyed and burned. And about 5,650 US-Saudi mercenaries were killed, injured and captured.”

Brigadier-General Saree affirmed that the Armed Forces are determined to liberate all the Yemeni lands, impose national sovereignty, and achieve freedom and independence by expelling the foreign occupation troops and purifying Yemen from the invaders and their traitors and mercenaries.

He said: “there is not a single battle in history in which mercenaries won, and there is no battle in which a foreigner was able to return his mercenaries to rule in his behalf a free and independent people.

He continued by saying "Marib is not a Saudi, a British or an American state. Marib is a Yemeni province. We assure the coalition of aggression that our battle against you is escalating and continuing as long as you occupy parts of our country and as long as you besiege and attack Yemeni people."

Bridger general Saree concluded the press conference by emphasizing that the armed forces, and with them all the free people, are moving towards liberating all the Yemeni lands until achieving freedom and independence, implementing what the leader Sayyed Abdulmalik al-Houthi promised.