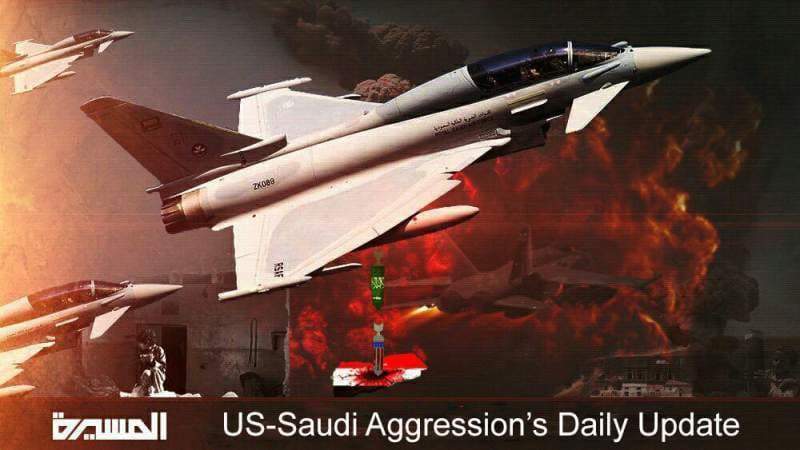 News - Yemen:   The US-Saudi aggression and its mercenaries on Wednesday continued to bomb a number of provinces injuring civilians. The mercenaries fighting with Saudi forces in the west coast violated the Stockholm Agreement in Hodeidah with a number of attacks.

In Sa'adah, Three citizens were killed and 12 others injured including three African immigrants, by the fire of the Saudi enemy in the areas of Al-Raqo and Al-Sheikh in Munabbih border district.

In addition, ten citizens were injured by the Saudi enemy's fire in Shada border district.

The US-Saudi aggression launched two raids on the communications network in Mazhab area of   Al-Safra District.

The US-Saudi aggression aircraft targeted, with two raids, the wreckage of the CH4 plane, which was shot down by the air defenses, in Al-Amsheya area, between the governorates of Amran and Sa'adah.

In Marib, the US-Saudi aggression launched six raids on Sirwah district, and six other raids on Al-Juba district.

The Liaison and Coordination Officers’ Operations Room, which monitors violations of the Stockholm Agreement and Ceasefire in Hodeidah, reported 5933 violations staged by US-Saudi forces and mercenaries during November .A source in Operation Room pointed out that the violations included launching 48 raids with warplanes and 126 raids with spy drones over several districts, nine infiltration attempts, nine creeps of US-Saudi mercenaries, in addition to developing over 179 new military fortifications and the flying of 367 warplanes and 714 spy drones over several districts. They staged 1434 attacks with 12803 missiles and artillery shells, and 3089 attacks with live bullets.