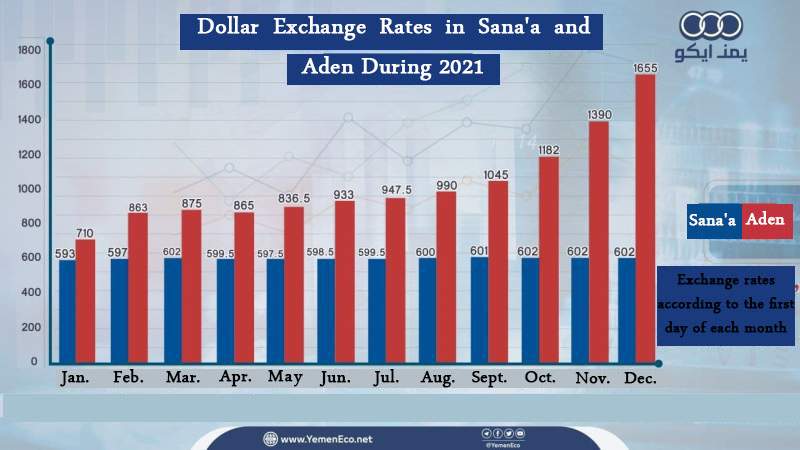 Yemen: Five days have passed since the end of 2021, burdened with the worst crises in the history of the Yemeni economy, in addition to being the worst years of war and the siege on shocking paradoxes between the Saudi-UAE-controlled areas and the areas of the Sana’a government, in terms of supply stability, economic and living conditions.

After 365 days, the exchange rate rose again in the aggression-controlled areas on January 4, 2022, to record 1030 Yemeni riyals for a dollar, down from 1750 riyals to the dollar in early December 2021.

The momentary decline that the exchange rates witnessed in those areas at the end of the past year, and a year that began its days on the rhythm of the new collapse of the riyal after the momentary decline witnessed last December, confirms that the declines became a seasonal occasion only in the standard of the economic war policy. It is like an injection of calm, its goal is to adapt the citizen to conditions that are more difficult than the previous ones, in preparation for a new rise, since the start of the transfer of Central Bank jobs from Sana’a to Aden in November 2016.

With its heights that began at the start of the war and the siege imposed by the US-Saudi aggression on the map of the Republic of Yemen on March 26, 2015, the handlings were backed by a strict financial and monetary reference taken by the Central Bank of Yemen in Sana’a. The dollar exchange rate was stable at 214.50-214.91 riyals. Despite the ferocity of the war and the tightening of the siege, the Central Bank's handlings, which were based on strengthening the supervisory tracks on the market, and combating the manifestations of the black market, stopped the price of the dollar at these limits.

With the intensification of the war and the suspension of oil exports, which represent about 75% of the country’s revenues, and the cessation of all foreign aid, foreign investments, tourism revenues, and other sources of revenue that were targeted, the price of the dollar began to move in the free market to the limits of 270  in September 2015. But the bank’s supervisory treatments were continuing, as the Central Bank of Yemen, led by Bin Hammam, and commercial banks and exchange companies, reached an agreement on November 4, 2015. Yemeni commercial banks pledged to provide traders with dollars to cover the needs of imports and to stop speculation in dollars, so that the riyal recovered to 247 riyals per dollar.

On April 20, 2015, the Central Bank of Yemen announced the reduction of the price of the Yemeni riyal against hard currencies to the level of the parallel market price. The purchasing of the Yemeni riyal decreased from 214.87 to 250 riyals per dollar. The exchange rates fluctuated during May, June, July and August between 260-310 riyals to the dollar. On June 6, 2016, the dollar exchange rate on the black market was recorded at about 310 riyals to the dollar. In the first half of September, the price of the dollar fell to 305 Yemeni riyals. On September 18, 2016, the US-Saudi aggression instructed its ally former Yemeni president Abd Rabbuh Mansour Hadi a decision to transfer the Central Bank of Yemen from the capital, Sana’a, to its branch in Aden. Despite that, the riyal remained stable at the range of 300-305 riyals per dollar, until the start of procedural work to transfer the functions of the Central Bank of Yemen to Aden in November 2016.

Despite the impact of the financial division caused by the decision on the exchange rate of the dollar, and the repercussions of diverting the revenue path to the Central Bank in Aden, which turned into a broker between financial resources and foreign banks, especially Saudi Arabia, the dollar price remained unified in the rise and fall between the areas affiliated with the Sana’a government and the aggression-controlled areas. The first adverse results of the decision emerged at the end of January 2017, when the dollar exchange rate jumped to 340 Yemeni riyals, both in Sana’a and Aden.

The price of the dollar rose in parallel during 2017 and 2018, until it reached 590 riyals per dollar in February 2019. This happened according to an American conspiracy that revealed itself earlier in Washington’s renewed support for the Central Bank’s actions in Aden, during a meeting in Riyadh that brought Hadi together with the American ambassador for Yemen. The latter had previously explicitly threatened to make the Yemeni riyal not equal to the ink with which it was printed. The procedures aimed at printing a new currency with different specifications in paper size, shape and durability, and in denominations 100 - 200 - 250 - 500 - 1000.

With the absence of the economic aspect in the negotiations, and the failure of the United Nations to neutralize the economy and end the financial division resulting from the decision to transfer the Central Bank jobs, the Central Bank in Sana’a studied the pro-aggression government’s steps in terms of monetary policy. It took a completely different course of action. The Central Bank of Aden adopted a monetary policy based on supply and demand, filling the market with banknotes of the aforementioned and various categories. The price of the dollar on December 31, 2018 reached 590 Yemeni riyals. On February 10, 2019, the Central Bank of Sana’a adopted a closed policy, fighting the black market and tightening control. However, the two parallel tracks of exchange rates in Sana’a and Aden continued, especially since the quadripartite conspiracy against the Yemeni currency is based on filling the market with securities of various specifications.

The quadripartite conspiracy (US, Britain, Saudi Arabia, UAE) towards the Yemeni currency was more clearly manifested in the Riyadh announcement on April 1, 2019, the signing of an agreement between the Ministry of Finance in the pro-aggression government, the Central Bank of Aden and the Arab Monetary Agency. The agreement stipulated that salaries would be transferred in Saudi riyals, and the exchange would be handled by the Central Bank in Aden. The move was followed by the adoption by the Central Bank of Aden of a new mechanism for oil importers on April 3, 2019, at the preferential rate in the dollar prices, which does not exceed 250 riyals per dollar, compared to the black market price of nearly 600 riyals. Thus, the Central Bank in Sana’a decided to seriously study these transformations and decisions, to take deterrent measures to stop the continuous collapse of the riyal, at least to end the state of parallelism between Sana’a and Aden. It tightened more control over the exchange markets and held violators accountable, but this did not work, especially with the influx of new currency with different specifications.

Sensing the danger to the currency, which was not stopped by measures that did not succeed in putting an end to the path of the riyal’s collapse in Sana’a in parallel with its collapse in the areas of the pro-aggression government, the Central Bank of Sana’a announced on December 19, 2019 the prohibition of circulation or possession of banknotes printed by the pro-aggression government at the behest of the aforementioned Quartet coalition. It justified the step that the circulation and possession of that currency constitutes harm to the national economy. It specified a period of thirty days starting from the day the decision was issued, requiring citizens to hand over the new cash denominations in their possession, and if they did not do so, they would be subject to legal accountability.

Since then the dollar price in Sana’a has fluctuated between 580-602 riyals, and the Saudi riyal between 155-160 riyals, while the Yemeni riyal from that day in the aggression-controlled areas followed a zigzag path of downward stability and free fall. It now reaches about 1500 riyals per dollar, and 400 riyals for a Saudi riyal.

All this success is the result of a different policy in terms of strict and resolute economic measures, according to the Governor of the Central Bank of Yemen in Sana'a, and the acting head of the Supreme Economic Committee, Hashem Ismail. In an interview with Al-Alam TV on August 25, Ismail confirmed that Sana’a focused mainly on thwarting American plans and stripping it of the currency note, which is the most important tool for bringing people to their knees.

"We studied the strategy of the American enemy, how it thinks, how it plans, how it wages the economic war, with what it starts, and what are the alternative steps it is maneuvering in the economic war,” the Governor of the Central Bank added. “We have worked against it. Our situation on the economic front is the same as the reality of the fighters on the military front."