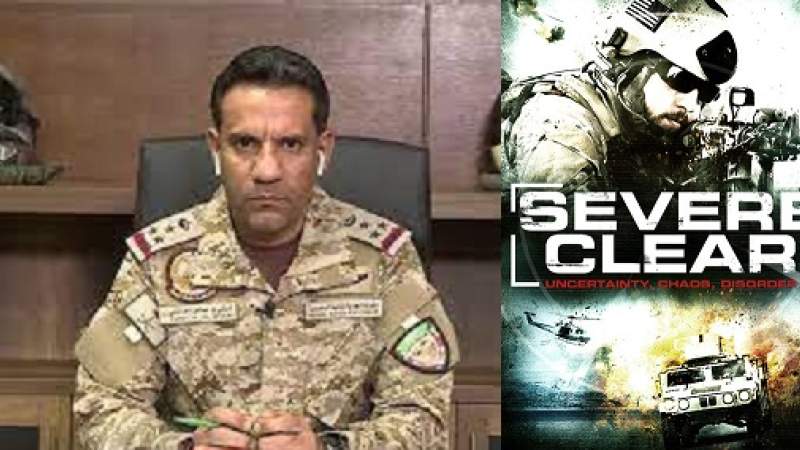 News - Yemen: The spokesman of the US-Saudi aggression, Brigadier Turki al-Maliki, lost his balance in his first appearance in a press conference on Wednesday in Shabwa governorate, following the "stolen film" scandal that provoked wide reactions during the past days.

He tried to distract journalists from the scandal, by announcing a new military operation called “Operation Happy Freedom of Yemen,” an operation that even the Ministry of Defense of the pro-aggression government did not know about, because it does not exist on the ground.

That improvised announcement, in which Al-Maliki tried to show the Saudi role in leading the battle of Shabwa and marginalizing the Emirati role, made him fall into the trap of questions from the UAE-backed media, which ignored his talk about the operation, and focused on the scandal of the scenes of the stolen film that Al-Maliki presented last Saturday.

The aggression's spokesman Turki Al-Maliki admitted, on Tuesday, that the video that was published of what he claimed was a workshop for  of ballistic missiles and drones in the port of Hodeidah “fabricated and incorrect.”

Al-Maliki confirmed, in a press conference held in the city of Ataq, the capital of Shabwa, that "the video was passed to him in a mistake, and it is "insignificant".

The coalition spokesman's confession drew widespread ridicule from social networking sites, describing his allegations as "impudent", as a result of
his reliance on fabrication to justify his attacks on civilians.

Al-Maliki seemed unable to respond to the journalists’ questions, so he implicitly admitted that the leadership of the aggression coalition had been subjected to an intelligence infiltration, trying to downplay the scandal of publishing a fabricated video.

Al-Maliki, during his defense of the scandal, said that the United Nations Committee of Experts had proven that Iran was smuggling weapons to Yemen via Hodeidah or the Arabian Sea, which, he claimed, included a major intelligence failure for his country and its allies.

Confusion prompted Al-Maliki to consider the military “Operation Happy Freedom of Yemen,” which he “heralded,” as an operation that “is not military in the modern military term,” but, as he claimed, “an operation that will move Yemen from war to stability, development and prosperity.

Journalists, who were unable to obtain answers about the fabricated video, followed al-Maliki out of the room. Al-Akhbar knew from press sources in Shabwa that the brigadier general refused to talk about the details of the new military operation he had announced, and expressed his dissatisfaction with the correspondents who asked him about the "stolen film" scandal.