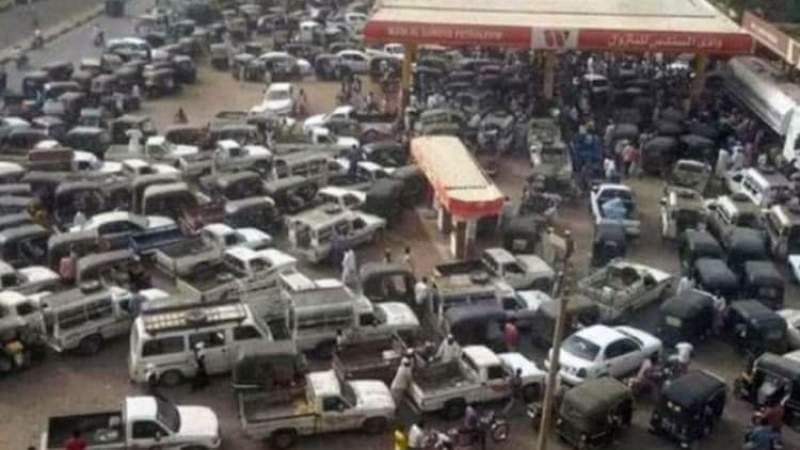 Yemen: A fuel crisis afflicts all Yemeni governorates, as a result of the practices and procedures of the Saudi-Emirati coalition and the pro-aggression government, the binary of economic and living crises in Yemen. Even the cities that include the ports designated by the pro-aggression government to receive oil derivatives ships were not spared from this crisis, not to mention the oil-producing governorates of Shabwa and Hadramawt.

As in the areas under the control of the US-Saudi-Emirati aggression and the pro-aggression government, Sana’a and the Yemeni governorates affiliated with it are suffering from a stifling crisis in fuel, which was considered the most severe since the aggression prevented the entry of fuel through the port of Hodeidah.

The fuel stations announced that their stocks of oil had run out. Hundreds of vehicles stood in long queues in front of these stations, hoping that shipments of oil would arrive in the coming days. Meanwhile, representatives of commercial power stations told subscribers in several neighborhoods of the capital, Sana'a, that these stations will have to cut off the power for hours during the day and night, as a result of the lack of diesel running these stations.

The crisis, which is the first of its kind over the years of war and siege, comes in the wake of the pro-aggression government’s decision in late December to limit the distribution, marketing and sale of oil supplied in the local market to the Yemen Petroleum Company in Aden. The decision deprives the Yemen Petroleum Company in Sana’a and its branches in the rest of the governorates affiliated to the Sana’a government from importing and distributing oil. It also prevents traders from importing oil to these governorates. Economists warned at the time of the decision that it would have catastrophic effects due to the lack or absence of fuel supplies.

The pro-aggression government’s decision came after a year and a half of suffering experienced by the citizens in these governorates, as a result of the detention of oil ships heading to the port of Hodeidah by the forces of aggression and the allied government. The result of that measure of a severe shortage of fuel supplies, compounded the suffering of citizens, and became a real threat to stop many vital, productive and service sectors, especially the health sector, whose disruption threatens the lives of thousands of citizens.

For his part, the official spokesman for the Yemen Petroleum Company in Sana’a, Issam Al-Mutawakil, confirmed in a statement to the Russian Sputnik Agency, on Wednesday, that the series of seizure of ships is proceeding in the same way as the previous one, represented by what he called “piracy on oil ships.” he noted that during 2021, only five oil ships were allowed to enter for public consumption.

Al-Mutawakel added that the aggression “is still holding six oil ships, all of which have been inspected and have entry permits from the United Nations. Despite that, it was hacked in international waters, although it bears a humanitarian character, and has nothing to do with the military or political aspect, and all Yemeni people benefit from it.”

“Today we are experiencing a stifling crisis in oil, and it is considered the most severe since the high pace of the blockade,” he said.

The governorates under the control of the US-Saudi-Emirati aggression are experiencing successive economic and living crises, on top of that, the scarcity of fuel and domestic gas. These are the governorates to which supplies and imports are not supposed to be subject to any restrictions, since whoever imposes restrictions on imports into Yemen is the controlling party.

It is difficult to compare the crises experienced by the coalition-controlled areas with the situation in Sana’a and the northern governorates of the country, to which the aggression impose restrictions on their imports, and prevent the entry of ships, especially fuel and domestic gas ships, to the port of Hodeidah, the only artery for the flow of imports to those provinces.

The coalition’s detention of dozens of fuel ships during more than a year and a half, and preventing them from entering the port of Hodeidah, despite being subject to inspection in accordance with the approved UN inspection and verification mechanism, and having obtained all the necessary permits from the UN inspection mission, caused a suffocating fuel crisis in all governorates. under the authority of Sana’a. Most of the important vital sectors, especially the health sector, are threatened with suspension, while work has been disrupted in many productive and service sectors, which caused economic losses of millions of dollars.