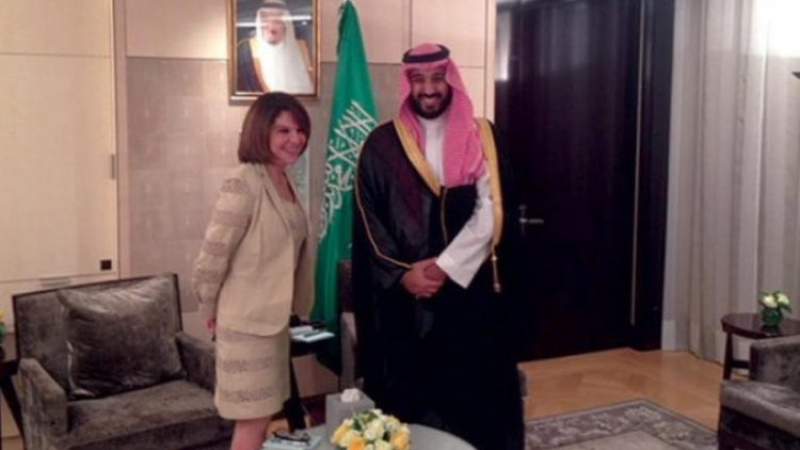 News – Middle East: A European investigation revealed hidden relations between a French Senator and Saudi Crown Prince, Mohammed bin Salman, as part of his use of the kingdom's wealth and capabilities to whitewash his crimes and violations.

An investigation published by the Democracy Transparency Center (DCT) showed that French Senator, Nathalie Goulet, had received financial bribes from Saudi Arabia to polish the image of Mohammed bin Salman.

The investigation referred to Goulet's positions that promoted Vision 2030 launched by Mohammed bin Salman years ago to diversify the Saudi economy, as well as launching propaganda campaigns to promote the reforms of the Saudi Crown Prince and attack his opponents.

The investigation stated that "Goulet despite her impeccable reputation, somewhat low degree of loyalty and limited skills, her well-groomed nails helped set in motion events of historical significance. Goulet is active in lobbying many countries, sometimes in conflict with each other, and even without government appointments, she has become a vital and secretive cabal in Middle Eastern politics."

Goulet is of Jewish descent, graduated with civil law and became a lawyer at the Paris Bar, all of which disappeared from her official resume after she was disqualified from the bar in 2000 after her involvement in misappropriating other people's money. After the death of Danielle Jolie, Goulet inherited his seat in the French National Assembly, and in 2011 appeared as a candidate on the lists of the Union Centriste, and was elected with a good result, a success that was repeated in the September 2017 elections.

In Parliament, Goulet fought mainly as a lobbyist for the Gulf states: two bills were planned, one on the aid agreement with Saudi Arabia and the other on military cooperation with the United Arab Emirates.

In October 2015, Goulet assumed the position of Rapporteur on the mission of the French Senate “on the organization, location and financing of Islam in France and its places of worship”.

This appointment comes after it proposed receiving 200,000 Syrian and Iraqi refugees in France in memory of their families who were deported during World War II.

Goulet is a big fan of Mohammed bin Salman and the Crown Prince of Abu Dhabi, Mohammed bin Zayed, and was known for her offensive disapproval of the opponents of Riyadh and Abu Dhabi, led by Turkey.

Goulet's position on the issues of the Arab Gulf is more volatile. In July 2011, it supported a bill to enhance military cooperation with the UAE, justifying this by the fact that Abu Dhabi had already signed similar agreements with the US and UK and was seeking to protect and support another nuclear power.

Under the agreement, France pledges to “deter or repel any aggression” against the UAE: “The potential aggressor is, of course, Iran, although it is not identified as a threat in any public document.”

France already has a permanent military base in Abu Dhabi: it is called the “peace camp,” which was opened in 2009, to compete with the United States and Britain for military and commercial influence in the region.

Goulet is also part of the French-Israeli friendship group, and has for years supported the establishment of normalizing relations between Tel Aviv and both Saudi Arabia and the UAE.