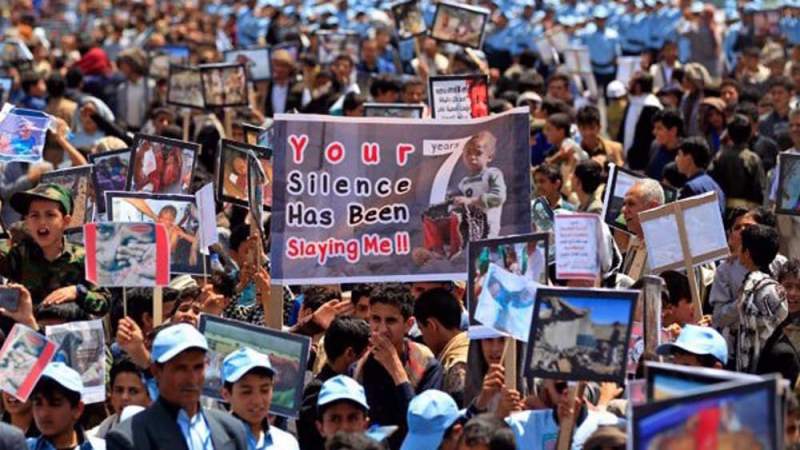 News - Middle East: Dozens of Americans have held a demonstration in New York City to denounce the bloody Saudi-led war on Yemen, urging Congress to support a proposal that would end the “unconstitutional” US involvement in the aggression.

The protest took place in front of the office of Congressman Gregory Meeks, chairman of the US House Foreign Affairs Committee, on Tuesday.

Carrying placards and chanting slogans, the participants called on Meeks to back a Yemen War Powers Resolution put forth by two Democrats, Congresswoman Pramila Jayapal and Congressman Peter DeFazio.

Kawthar Abdullah, an organizer at the Yemeni Alliance Committee, said the aim of Tuesday's demonstration, was to pressure Meeks to back the motion, which would force a vote on the Senate floor to end the "unconstitutional US participation" in the military invasion of Yemen.

"We will not sit by as the Constitution is ignored and the Yemeni people suffer seven years into this unauthorized war," the lawmakers, who proposed the resolution, said in a statement.

Saudi Arabia launched the devastating war on its southern neighbor in March 2015 in collaboration with a number of its allied states.

The aim was to return to power the former Riyadh-backed regime and crush the popular Ansarullah movement which has been running state affairs in the absence of an effective government in Yemen.

The protracted offensive has stopped well shy of all of its goals, despite killing tens of thousands of Yemenis and turning entire Yemen into the scene of the world’s worst humanitarian crisis.

Shortly after taking office last year, US President Joe Biden declared that he would end "American support for offensive operations in the war.”
A year into his presidency, however, the White House keeps approving weapons sales to the Riyadh regime.

"Without US support, Saudi Arabia would not be able to conduct its daily bombings on Yemen," said Annelle Sheline, a Middle East research fellow at the Quincy Institute.

"Our weapons sales and ongoing maintenance contracts with the Saudi Air Force directly implicate Americans in the starvation and deaths of a quarter-million Yemenis. Because other legislative paths have failed, only a War Powers Resolution will end US support for this devastating war."