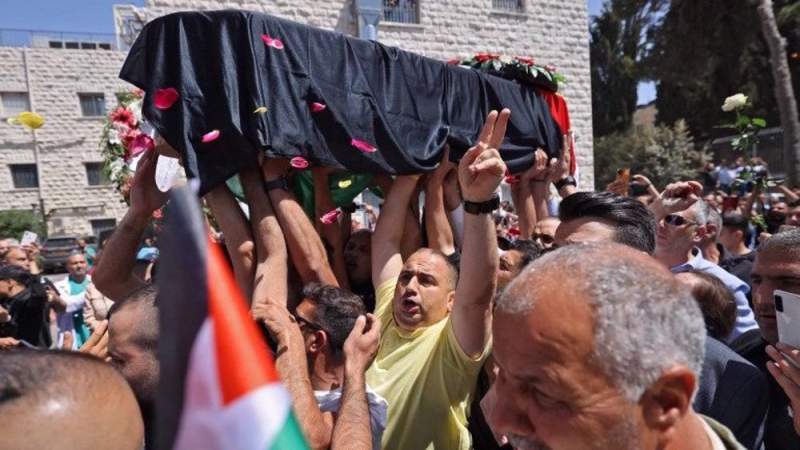 News - Middle East: Israeli forces have attacked and beaten the mourners attending the funeral procession of veteran Palestinian journalist Shireen Abu Akleh, who was killed by the regime troops in the occupied West Bank city of Jenin.

The Palestinian Information Center (Palinfo) said in a tweet on Friday that the violence erupted as the Palestinian mourners began to move Abu Akleh’s casket from the St Louis French Hospital in Sheikh Jarrah neighborhood of the occupied al-Quds.

“Dozens of injuries during the storming of the French hospital in al-Quds by the occupation forces,” Palinfo wrote, quoting the Red Crescent in the city.

Media reports said Israeli forces assaulted mourners to prevent them from carrying the coffin of Abu Akleh from the hospital to the Roman Catholic church in the Old City, before taking her to the Mount Zion cemetery, where she will be buried alongside her deceased parents.

Ahead of the funeral, the Israeli regime had imposed a number of restrictions, including on the number of mourners attending the service and the use of Palestinian flags and posters. The occupying forces even stormed Abu Akleh's home earlier in the day, attempting to tear down a Palestinian flag that was erected in her honor.

Al Jazeera reported that Israeli forces arrested at least four mourners during the procession, including at least two for raising the Palestinian flag in occupied al-Quds.

Despite the restrictions, thousands of Muslim and Christian Palestinians from Jerusalem al-Quds and from across the occupied territories, including many colleagues and fellow journalists, came to pay their respects to the veteran Al Jazeera journalist, who was shot in the head Wednesday while covering an Israeli raid against the city of Jenin.

On Friday afternoon, Abu Akleh's body arrived at the Roman Catholic Church, where prayers were held for her soul before it was transferred to the cemetery. The churches of al-Quds rang their bells in conjunction with the funeral, amid heavy presence of the occupation police and military roadblocks in the roads leading to the cemetery.

Abu Akleh was highly regarded by viewers across the Muslim world, particularly in Palestine, where she was at the forefront of covering Israeli crimes and occupation for more than two decades. Her killing has proven yet again that the Israeli regime is willing to go to such great lengths to conceal its oppression of the Palestinians.

Video footage from the moments after Abu Akleh was shot showed the 51-year-old journalist wearing a blue vest marked "Press." At least two of her colleagues who were with her said they had deliberately come under Israeli sniper fire.

Israel only understands language of force

Mustafa Barghouti, member of Palestine Liberation Organization's Central Council, condemned the killing of Abu Akleh on Friday, saying Israel understands nothing but the language of force and that only resistance will deter the occupying regime from its constant aggression.

Barghouti stressed that Tel Aviv attempts to whitewash its crime of assassinating the veteran Palestinian journalist but it will not come to pass.

The senior Palestinian official added that what is happening in Palestine exposes the duplicity of international standards in dealing with Israeli crimes.

He added that the Palestinians are united in resisting the occupation forces and consolidating their resolve to assert their rights.