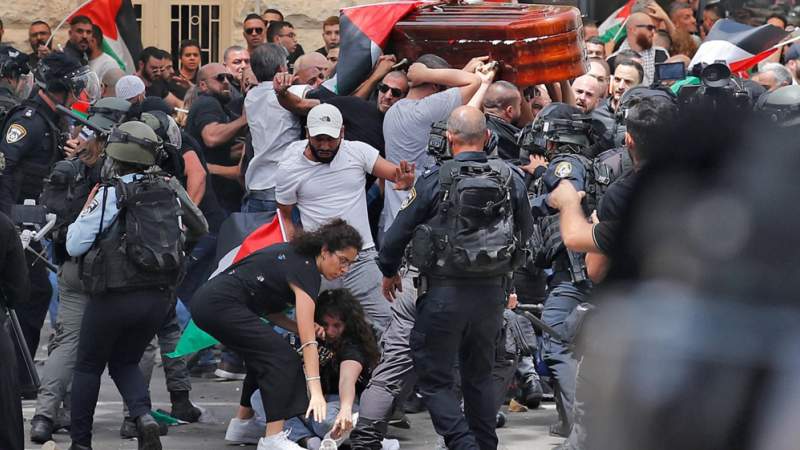 Abu Akleh was fatally shot by Israeli troops on Wednesday as she was covering an army raid on the Jenin refugee camp in the northern part of the occupied West Bank.

In a press statement on Friday night, members of the council conveyed their sympathy and deepest condolences to the victim's family.

They called for “an immediate, thorough, transparent, fair and impartial investigation” into her death, and stressed the need to ensure accountability.

The council members reiterated that “journalists should be protected as civilians.”

The Security Council statement, however, made no mention of the violence during Friday’s funeral for Abu Akleh.

The attacks were condemned as “a scene that violates all norms and international laws”.

The UN’s Human Rights Office has also called for a thorough and independent investigation into the killing, saying it might constitute a war crime.

Abu Akleh was wearing a press vest when she was hit by a live bullet. In video footage of the incident, she can be seen wearing a blue flak jacket clearly marked with the word “PRESS.”

Ali Samoudi, another Palestinian journalist for Al Jazeera channel, was hospitalized in stable condition after being shot in the back.

Samoudi told The Associated Press they were among a group of seven reporters who went to cover the raid early Wednesday.

He said they were all wearing protective gear that clearly marked them as reporters, and they passed by Israeli troops so the soldiers would see them and know that they were there.

He said the first shot missed them, then a second struck him, and a third killed Abu Akleh. He also noted there were no combatants or other civilians in the area — only the reporters and Israeli army troops.

Shaza Hanaysheh, a reporter with a Palestinian news website who was also among the reporters, gave a similar account, stressing there were no clashes or shooting in the immediate area.

She said that when the shots rang out she, Abu Akleh ran toward a tree to take shelter.

“I reached the tree before Shireen. She fell on the ground,” Hanaysheh said. “The soldiers did not stop shooting even after she fell. Every time I extended my hand to pull Shireen, the soldiers fired at us.”
Shireen Abu Akleh’s gory murder by Israel and Western media's skulduggery

The Palestinian Ministry of Information condemned what it said was a “shocking crime” committed by Israeli forces.

“The Israeli occupation has repeatedly targeted, injured and assaulted Palestinian journalists. Shireen joins other journalists that Israel killed as they worked on revealing the crimes of the Israeli occupation. The killing can never deter our people from continuing the struggle for freedom, will only shorten the life of the occupying regime and will bring us closer to freedom and an end to Israeli impunity,” it said.

Meanwhile, a young Palestinian man has succumbed to the wounds he suffered weeks earlier after dozens of Israeli military forces stormed the al-Aqsa Mosque compound in the occupied Old City of al-Quds.

Abdul Rahman al-Sharif said his brother died in hospital after being in a coma since his injury on April 22.

Walid was among thousands of people, who attended prayer at the al-Aqsa Mosque compound on the third Friday of the holy fasting month of Ramadan.