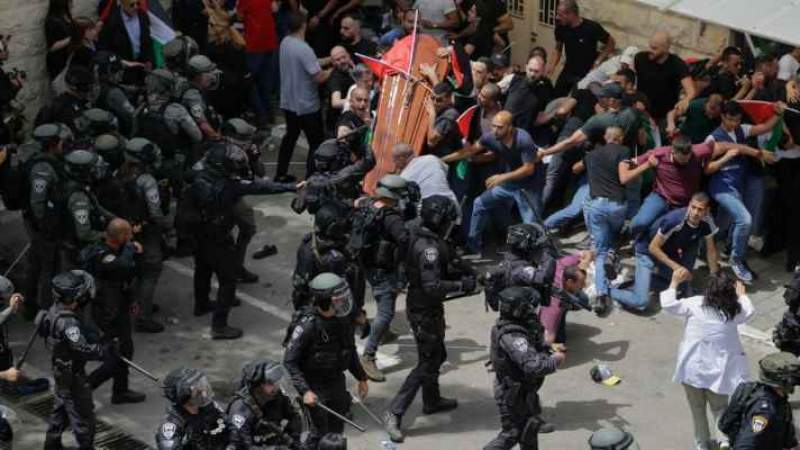 Yemen: On the television, the world watched on Friday the arrogance of the Israeli enemy and its forces storming the French hospital in the Sheikh Jarrah neighborhood of Al-Quds, raising their weapons and firing sound bombs inside the hospital, which is filled with patients and beating the mourners of the Palestinian journalist Shireen Abu Akleh.

British and American representatives commented that this attack could not be justified or defended.

The icon of the Palestinian press, Shireen Abu Akleh, was assassinated in Jenin refugee camp, while she was practicing her work in conveying the truth to the world, on Wednesday morning, with an explosive bullet, owned only by the Israeli army, directly hit the head.

The criminal entity tried to deny the crime with the help of the US, accusing the Palestinian resistance party, but the international interaction exposed the Zionists and their American sponsors, so they turn into recognition of the crime and searching for justifications.

For 25 years, the name of the Palestinian journalist, who are working for Al-Jazeera channel, Shireen Abu Akleh, was linked with Palestine through her reports that conveyed the truth and the picture of the revolution ‘Intifada’ and two wars waged by the Zionist enemy against the Palestinian people. Her name disturbed the Zionist entity, her presence worried it and exposed its soldiers' flaws, weakness and fragility, so it killed her.

In her interviews, the Palestinian journalist confirms that she started her work defending the Palestinian cause. She confirmed that her happiest moments is when evacuating Zionist settlements as Palestinian land is liberated after a long resistance.

Shireen Abu Akleh said that the media as a platform for the Palestinian cause. According to her, there is no neutral media, but media that conveys the truth and others falsify it.

The killing of Shireen Abu Akleh by the hands of the Zionist entity is a crime at the top of a long list of crimes against the Palestinian people since the moment of the establishment of the entity. It committed massacres in Palestine since the forties of the last century.
The killing of Abu Aqila reminds us of the crimes of the Zionist enemy against Palestinian journalists, such as the cartoonist Naji Al-Ali, who was chased by the entity to London, where he was killed there.

The cold-blooded killing of journalists and media professionals, despite international laws and conventions that protect them, is primarily linked to the camp of the United States, Israel and their allies in the region. This is what the Yemeni Media Union indicated while organizing a sit-down in front of the Palestinian embassy in the Yemeni capital, Sana’a.

The Yemeni Media Union reminded the world of the killing and wounding of 281 journalists and media professionals in Yemen in the last seven years by the US-Saudi aggression and siege, which claimed the lives of hundreds of thousands of Yemenis and harmed the lives of millions of them.

For seven years, the US and its allies imposed a siege on Yemen, so that it could commit thousands of war crimes that shocked the world due to the few of which reached international public opinion. It targeted Yemeni national media with air raids, killing its crews wherever possible, not to mention the practice of heavily funded misinformation.

Standing a minute of silence by the United Nations for the spirit of Palestinian journalist Shireen Abu Akleh will not protect journalists as much as it confirms the inability of the international body to impose respect for the international laws as it happened for years in Yemen.