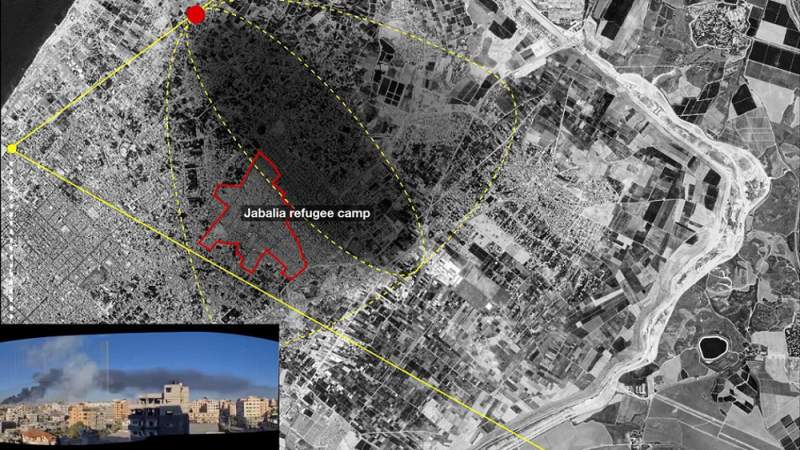 On May 15, 2021, the Israeli military launched an artillery attack on the Khudair Pharmaceuticals and Agricultural Tools Company, considered as the largest agrochemical warehouse in the north of the blockaded enclave, setting fire to tons of pesticides, fertilizers, plastics and nylons.

The shelling attack occurred in the midst of the 11-day Israeli war against Gaza Strip, after weeks of violence against Palestinians in Al-Quds and a brutal crackdown on worshipers at the al-Aqsa Mosque, as well as attempts to steal their land in the Sheikh Jarrah neighborhood.

The results of a new investigation in the attack and its consequences by the West Bank-based Palestinian human rights NGO Al-Haq showed that Israel deliberately employed highly flammable munitions in the targeted attack, which burned tons of dangerous pesticides and set off an unfolding environmental disaster.

The FAI Unit built a 3D model of the warehouse after interviewing the locals, consulting international experts and analyzing data obtained from dozens of videos, including CCTV and drone footage, in a bid to establish the circumstances of the blaze, and determine the effects of the release of toxic chemicals.

“Our findings reveal that Israeli forces illegally employed highly flammable munitions in a targeted attack on the warehouse, whose location and contents are known to Israel, setting on fire over 50 tons of hazardous chemicals stored on the site,” said al-Haq.

The report is the first publication by Al-Haq’s newly-established Forensic Architecture Investigation Unit (FAI Unit), a first-of-its-kind collaboration in the Middle East with Forensic Architecture, a research agency based at Goldsmiths, University of London, which conducts spatial and media analysis for NGOs and in international human rights cases.

“Within the first hour, the toxic plume had affected an area of approximately 5.7 square kilometers — spanning Beit Lahiya and its agricultural zones, as well as the densely populated Jabaliya refugee camp — placing approximately 3,000 homes in its shadow,” the report said, adding that the six-hour-long fire at the warehouse destroyed most of the facility and consuming the majority of its contents.

Al-Haq said that a toxic plume produced by the attack is tantamount to the indirect deploying of chemical weapons.

“Israeli occupation forces’ shelling of the Khudair Agrochemical Warehouse, with knowledge of the presence of toxic chemicals stored therein, is tantamount to chemical weapons through indirect means. Such acts are clearly prohibited… and prosecutable under the Rome Statute of the International Criminal Court,” the group said in a legal report based on the findings of the investigation.

The probe determined that the Israeli military used several M150 Smoke HC 155mm shells in its attack against the warehouse.

“The dimensions and the smoke tail match the M150 Smoke HC 155mm ammunition developed by the Israeli weapons manufacturer Elbit Systems: an ‘advanced smoke projectile’ and a new type of shell designed to splinter into five separate canisters, all of which emit high-density smoke,” the report said.

It also stressed that the attack on the Khudair agrochemical warehouse was the first in an apparent string of similar attacks by the Tel Aviv regime, intentionally hitting civilian economic infrastructure and the industrial sector.

“On 17 May, two days after the Khudair Warehouse was destroyed, the Fomco Sponge Factory near Jabaliya camp was attacked in a similar manner, causing a large-scale fire. On the same day, over half a dozen other factories and warehouses, located in the industrial zone east of Gaza’s Shejaiyyeh neighborhood, were also bombed,” it stated.

In the latest bombardment campaign of Gaza by Israel in May last year, at least 260 Palestinians, including over 60 children, were killed in a time span of 11 days that began on May 10. The Gaza-based resistance movements retaliated.

The regime was eventually forced to announce a ceasefire, brokered by Egypt, which came into force in the early hours of May 21.

The Gaza Strip, home to some two million people, has been under a blockade imposed by Israel since June 2007.