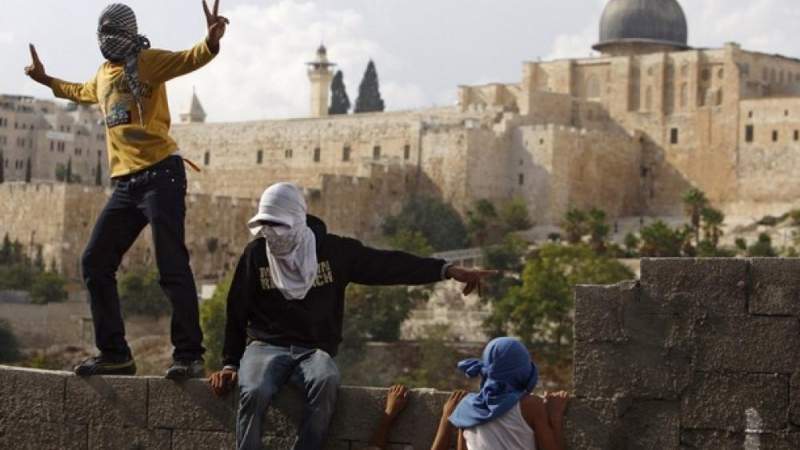 Middle East: A bloody day in Palestine, Al-Quds and Al-Aqsa Mosque was witnessed in the face of Zionist provocations that were the biggest since Operation Seif Al-Quds last year.

In the morning, two thousand settlers, led by members of the Zionist Knesset, stormed the courtyards of the blessed Al-Aqsa Mosque under the protection of the Israeli enemy forces, prior to the so-called “flags march” in occupied Al-Quds, while the occupation forces evacuated the Bab al-Amud area and arrested dozens of Palestinians, amid calls by Palestinian movements to gather in Bab al-Amud to face the march.

The former Zionist leader, Benjamin Netanyahu, stormed Al-Buraq with extremist Knesset members in the courtyards of Al-Aqsa, and large numbers of Zionist settlers flocked from the West Al-Quds to the Bab Al-Amud area..

Palestinians who were stationed in Al-Aqsa Mosque confronted the enemy forces by firing firecrackers and throwing stones, they also chanted and knocked on the doors.

On Sunday afternoon, the settlers' provocative march, called the "Flags March", began in Al-Quds, under the strict protection by the Zionist enemy army. Settlers attacked Palestinians youths in the Old City of Quds amid Violent confrontations.

At Bab Al-Amud area, hundreds of Zionists stood chanting slogans calling for death to Arabs and Muslims, after realizing that their march would not go where they had planned it, and that their government had actually retreated under the threat of the Palestinian movements that had mobilized all their mujahideen and missiles in Gaza.

The confrontations erupted in the Old City of Quds at a time when the Palestinian resistance was awaiting a high coordination and a crowd of all the factions, which announced to repeat the sword of Quds operation, if the Al-Aqsa is touched or threatened.

The Islamic Jihad spokesman Tariq Salmi said: The Zionist enemy wants to deliver a blow to the resistance and the resistance axis, as it still stronger, but it fails to do so.

In the Arab world, the strongest position supporting Palestine came from Yemen despite the US-Saudi aggression and siege, as the Council of Ministers in the National Salvation Government confirmed its condemnation of the desecration of Al-Aqsa Mosque by the Zionists and approved the preparation of a draft law to criminalize normalization with the Zionist entity.

It agrees with the desire of the Yemeni people and their positions towards the Palestinian cause, as well as the direction of the axis of resistance defending Palestine and Al-Quds.

The prime minister, Bin Habtoor renewed Yemen's standing by all its available capabilities with the Palestinian people and its presence if the Zionist provocations against Al-Aqsa went to the point of a military confrontations, considering Palestine the central issue of the nation.

He pointed out that the aim of the Zionist provocations at Al-Aqsa is to show the entity the victorious position after the employment and normalization systems were exposed.

For its part, The Parliament affirmed its full solidarity with the Palestinian people and their right to establish their independent state with Al-Quds Al-Sharif as its capital.

It also condemned the attacks carried out by the Zionist settlers, guarded by the occupation forces, against the Palestinians, including the storming of Al-Aqsa Mosque.

It strongly condemned the attack on the prayers in the courtyards of Al-Aqsa Mosque and their expulsion from it by force, considering this escalation a serious violation of the rights of the Palestinian people and a provocation to the feelings of Muslims all over the world.
In turn, the Political Bureau of Ansarullah saluted the steadfastness of the Palestinian people and their response to the herds of settlers and occupation forces during their storming of Al-Aqsa Mosque.

In a statement issued on Sunday, the Political Bureau condemned the provocative acts carried out by the Israeli enemy forces and settlers in occupied Al-Quds, a violation of the sanctity of Al-Aqsa, and attacks and arrests of dozens of Palestinians.

The statement pointed out that the Israeli aggression witnessed in occupied Al-Quds obliges all Muslims to support the Palestinian people by all means of force.

The Political Bureau of Ansarullah also confirmed that the enemy entity is living in illusions of power, and it will not be able to dedicate Al-Quds as the capital of its entity.

In the Arab world, the Egyptian and Qatari Foreign Ministry condemned the Zionist settlers’ storming of the courtyards of Al-Aqsa Mosque, while the Islamic Republic of Iran condemned the Zionist provocations at Al-Aqsa Mosque, affirmed the readiness of Al-Quds axis alongside the Palestinian resistance to defend Al-Aqsa and Al-Quds, and called on the free world to condemn Zionist practices.

Observers commented on the course of the Palestinian day by saying that the entity tried to impose its control over Al-Quds through the media, but just hours in which the Zionists scattered with their flags and their masses. It appeared that they must leave, even after a while, despite the arrogance and statements.