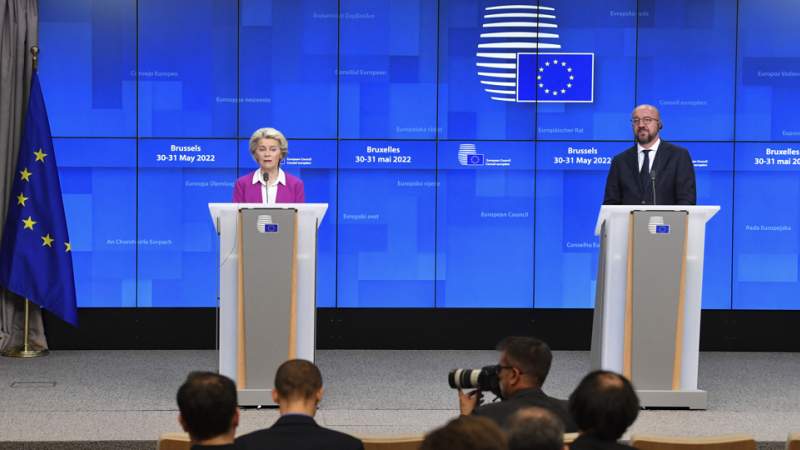 News - World: The European Union leaders on Monday struck a deal to ban the majority of Russian oil imports over Moscow’s military operation in Ukraine, which is now into its fourth month.

European Council chief Charles Michel announced in a tweet, following an extraordinary summit attended by EU leaders in Brussels to discuss a fresh package of sanctions against Russia.

"Agreement to ban the export of Russian oil to the EU. This immediately covers more than 2/3 of oil imports from Russia, cutting a huge source of financing for its war machine," Michel said.

The agreed measures also include the eviction of Sberbank, Russia's biggest lender, from the SWIFT financial messaging system.

He said it would deliver maximum “pressure on Russia to end the war”.

The embargo allows a “temporary” exemption for pipeline deliveries. It was, however, not clear how long the exemption of imports delivered by pipeline will last.

The EU reportedly agreed to ban 90 percent of Russian oil imports by the end of the year.

Ursula von der Leyen, president of the European Commission, at a press conference said Russian oil delivered by tankers would be banned, while an exemption will be made for the southern segment of the Druzhba pipeline, which goes to Hungary, Slovakia, and Czech Republic.

"As we have a clear political statement by Poland and Germany that they will, as the others, wind down Russian oil, until the end of the year. We have covered overall 90 percent of Russian oil being wind down during this time frame,” von der Leyen said.

“Leftover is the roundabout 10 or 11 percent that is covered by the southern Druzhba. We have agreed for the moment being for an exemption.”

The deal between the EU leaders was struck late on Monday after weeks of difficult negotiations as Hungary, which relies heavily on Russian crude delivered via pipeline, opposed the oil embargo saying it would “completely destroy” the country’s energy supply security.

Meanwhile, the Financial Times in a report said the partial ban “risks distorting competition in the EU oil market, with refineries connected to pipelines from Russia enjoying a price advantage”.

The EU leaders will meet again in Brussels on Tuesday to discuss the bloc's response to Russia's military operation in Ukraine.

Since the start of the offensive, the Western countries have imposed unprecedented sanctions on Moscow and dispatched a large cache of weapons to Ukraine, defying warnings from the Kremlin.