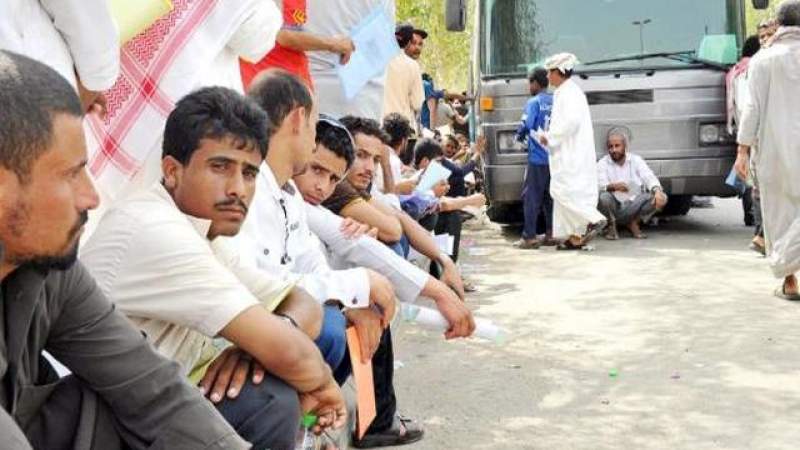 Yemen: The issue of expelling Yemeni residents from Saudi Arabia is not a state of hostility imposed by the war, which is continuing in its eighth year, but it has become a historical rift in the neighbor-neighbor relationship.

The expulsions carried out by the Saudi authorities are in the context of inhumane treatment, furthermore Riyadh is violating the foundations and provisions of two treaties with Yemen, namely the treaties of Taif and Jeddah.

In previous years, Saudi Arabia has been creating justifications for expelling the Yemenis who spent their lives in developing Saudi society and building the kingdom’s present with their efforts, believing that the neighboring country would thank them for what they made during those years.

By an American decision, Saudi Arabia led a war on Yemen, which exacerbated the suffering of the poor country, causing many disasters, economic crisis, health and education destruction, and burdened the Yemenis with the continuation of this aggression and blockade.
And the US-Saudi aggression found that Yemeni people are steadfast and patient people, failing to achieve any victory, it began to pressure its residents by issuing many arbitrary decisions.

It issued the sponsorship system and the Saudization of professions, raising residence fees in large sums. It recently expelled Yemeni workers and academics under false pretexts. These decisions only reflected their failure to bring the people to their knees with weapons, so they resorted to expulsion as one of the solutions that it believes will achieve what it wants when imposing hunger on civilians, including children, women and the elderly.

What Riyadh is doing in expelling Yemenis amid condoning by human rights organizations and the United Nations, is a violation of two previous treaties, one of which was signed in 1934, the Taif Treaty, the most prominent of which was the end of war, tolerance and good neighborliness, and the second the Treaty of Jeddah 2000.

The first article of the Taif Treaty stipulates the following: “The state of war between the Kingdom of Yemen ends as soon as this treaty is signed, and a state of lasting peace, solid friendship, and permanent Arab Islamic brotherhood cannot be violated immediately between the two kings and their countries and peoples. The two High Contracting Parties undertake to resolve, in a spirit of cordiality and friendship, all disputes and differences that may occur between them, and that the spirit of Arab Islamic brotherhood prevails in their relationship in all situations.”

Focusing on these provisions, it seems clear that Saudi intransigence blew them up once, and they were moral obligations before they were legal texts.

From this point of view, the Jeddah Treaty came in the year 2000, based on the Treaty of Taif, in its details, demarcating the borders was an extension conditional on good neighborliness and respect for the Yemeni citizen and treating him in a spirit of brotherhood.

Emphasizing that the cases of expulsion of Yemenis have become an undeclared Saudi decision, the flow of residents to Yemen continues, as the International Organization for Migration revealed, Wednesday, that Riyadh had deported 5,440 during May, bringing the number of deportations within five months of this year to 29,000 residents.

As for the “Americans for Democracy and Human Rights in the Gulf” organization, it confirmed that Saudi Arabia has continued to unjustly target Yemeni residents since July 2021. The organization explained that Yemeni residents have been subjected to a myriad of violations committed by the Saudi authorities, including arbitrary arrest, discriminatory restrictions on employment practices, and loss of livelihood sources due to the unjustified termination of their work contracts.
In August 2021, the Saudi authorities issued an ultimatum to all its facilities in Najran, Asir and Jizan who have Yemeni workers, to end their sponsorship and deport them within three months. A Saudi request to send workers from Manila to work in the place of the Yemenis, which means that there is a great intention to expel more.

According to observers and human rights defenders, Saudi Arabia is waging another war against Yemen parallel to its Western-backed military war, a war no less dangerous than it. Whereas, Americans for Democracy considered that Saudi Arabia is “carrying out reprisals against Yemeni residents in the Kingdom.”

The Yemeni public opinion in is against the Saudi policy of humiliation for the Yemenis, and demands the disengagement of the two treaties and the return of Yemeni lands to before the Taif Treaty, until the Saudi regime returns to its senses perhaps it will find in a third treaty what compels it to respect human beings, whether in Yemen or other countries that have been afflicted by Saudi conspiracies.