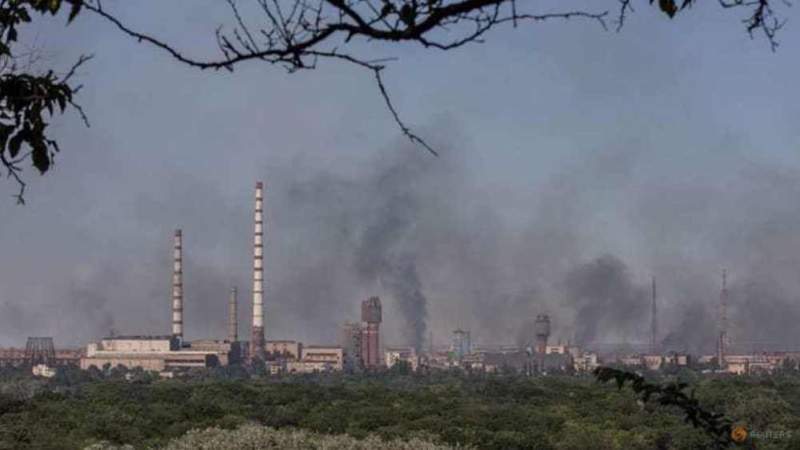 News - World:  Russia has urged the Ukrainian forces holed up in a chemical plant in the strategic city of Severodonetsk in the Donbass to lay down their arms by early Wednesday, as it pushes ahead to completely bring the eastern region under its control.

He added that the civilians encircled in the Azot chemical plant would be let out through a humanitarian corridor.

Earlier in the day, the governor of the Luhansk region, Sergiy Gaiday, said Russian forces were now in control of almost 80 percent of Severodonetsk. He also said Ukrainian forces had now been pushed to the industrial outskirts of the city, adding that about 500 civilians were still sheltering in the Azot chemical plant.

Shelling on Azot was so strong that “people can no longer stand it in the shelters, their psychological state is on edge,” he claimed.

Ukraine says Russian troops have destroyed all the three bridges leading out of the city and that it is still trying to evacuate civilians after Russian forces destroyed the last bridge.

“We have to hold strong... The more losses the enemy suffers, (the) less strength it will have to pursue its aggression,” Ukrainian President Volodymyr Zelensky said in an address late on Tuesday.

Severodonetsk has been the epicenter of the battles in eastern Ukraine for control over the industrialized Donbass region, made up of the Luhansk and Donetsk provinces.

After the capture of Severodonetsk, Russian forces are expected to take control of Slovyansk and Kramatorsk to complete their takeover of the entire Donbass.

Meanwhile, NATO Secretary General Jens Stoltenberg has called on Western countries to send Ukraine more heavy weaponry as it battles Russia’s advance in the east of the country.

Stoltenberg made the remarks at a press conference in The Hague on Tuesday, after meeting the leaders of seven European NATO allies ahead of a key summit on the situation in Ukraine.

“We have not done enough to defend Ukraine, to support the Ukrainian people, to support their freedom and sovereignty,” he said. “And this is why I urge you, I ask you to do much more to deliver weapons, artillery to Ukraine. They need this to defend their country.”

“Because they absolutely depend on that to be able to stand up against the brutal Russian invasion,” he said.

Ukraine is pleading for faster and more deliveries of weapons from the West as Russia’s offensive continues.

Zelensky criticized some European countries for failing to supply weapons that would help Kiev in pushing back Russian troops on Tuesday, as he again appealed for heavy weapons from the West.

Later in the day, Ukraine’s deputy defense minister Hanna Maliar also said in televised remarks that her country had received just 10 percent of the weapons it had requested from the West to help fight off the Russian offensive.

“No matter how hard Ukraine tries, no matter how professional our army is, without the help of Western partners we will not be able to win this war,” she said.

Maliar said there should be “a clear timeframe” for such deliveries as every delay cost Ukraine dearly and risked more territory falling into Russian hands.

“We need to know clear deadlines because every day there’s a delay, we’re talking about the lives of Ukrainian soldiers and civilians,” she said.

Russia launched the military offensive against Ukraine on February 24.

Western countries responded to Russia’s operation by backing Ukraine with cash and increasingly heavy weaponry, while imposing unprecedented waves of sanction against Moscow. Russia has repeatedly warned the West against continuing military assistance to Kiev, saying the weapons deliveries were “pouring oil on the flames of the war.”