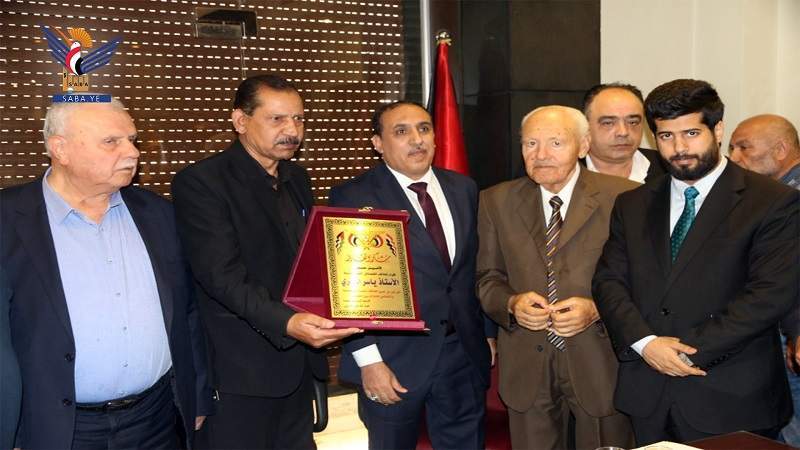 News - Yemen: Yemen’s Ambassador in Syria, Abdullah Sabri, praised the role of the Palestinian resistance and its support for Yemen in confronting the US-Saudi-Emirati aggression.

Sabri’s remarks came during his participation in a ceremony honoring the Palestinian leader Yasser Al-Masry, which was organized by the Palestinian resistance factions in Damascus, on the occasion of the end of his term as Secretary of the Follow-up Committee of the Palestinian Forces Alliance,

Ambassador Sabri appreciated the interaction of the Palestinian faction leaders with the activities of the Yemeni embassy in Syria, which strengthened the bonds of the relationship between the two peoples who are subjected to oppression and the same conspiracy.

He commended the efforts of Al-Masry, who played an active role in mobilizing solidarity with the cause and the Yemeni people, and coordinating with Arab and Islamic bodies and authorities within the framework of the resistance axis.

For his part, the Palestinian leader praised the participation of the Embassy of Yemen in the honoring ceremony.

"The Yemeni participation in this ceremony comes as part of cohesion between Yemen and Palestine, and reflects the Arabism and authenticity of Yemen and Yemenis, and their support for the Palestinian cause and the fateful issues of the nation," Al-Masry said.

He saluted the loyalty of the Yemeni people and the support of millions of Yemenis of Palestine at various turns and occasions. He praised the steadfastness and sacrifices of the Yemeni people in the face of the absurd war waged by the Saudi-led aggression and its masters.

Al-Masry affirmed that Yemen, Palestine and the axis of resistance are integrated parties rooted in a trench and one destiny, and victory will be their ally soon.