Biden Urges NATO, G7 to 'Stay Together' Against Russia 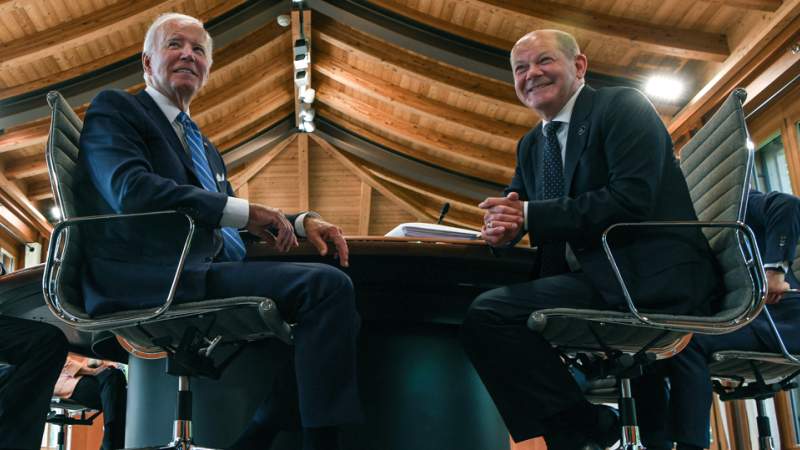 News - World: US President Joe Biden has urged NATO allies and the world's wealthiest nations (G7) to "stay together" against Russia while visiting Germany for a three-day summit of G7 countries.

Biden kicked off a series of meetings with world leaders on Sunday in the Bavarian Alps, Germany, ahead of the summit.

At a meeting with German Chancellor Olaf Scholz, he urged his Western allies "to stay together."

He said that Russian President Vladimir Putin had been hoping "that somehow NATO and the G7 would splinter. But we haven't and we're not going to."

The US president met his German host in the picturesque Elmau Castle where the G7 -- Britain, Canada, France, Germany, Italy, Japan and the US -- was holding the summit.

Biden praised Scholz's leadership as current chair of the G7 at the time of the conflict in Ukraine.

"I want to compliment you for stepping up as you did when you became chancellor" and "the way you had a great impact on the rest of Europe to move, particularly relating to Ukraine," Biden told Scholz.

As G7 summit began on Sunday, the leaders had agreed to a ban on imports of Russian gold, the second-largest export after oil for Russia, according to a source familiar with the matter.

Biden has long been pushing Europe to take a stance against Russia. Experts, however, say his domestic struggles at home may impede his ability to lead the European Union against Moscow.

The meetings in Europe come as Biden is facing challenges both at home and abroad.

At home, Biden faces soaring inflation that threatens to pull the country into a recession.

Abroad, the war in Ukraine has triggered a looming global food shortage and soaring energy prices.

Biden placed an embargo on Russian oil earlier this year, shortly after President Vladimir Putin declared a military campaign against Ukraine on February 24.

In addition to the oil embargo, Washington and its Western allies imposed unprecedented waves of sanctions on Moscow.

The move has so far sent the prices of grain, cooking oil, fertilizers, and energy skyrocketing.