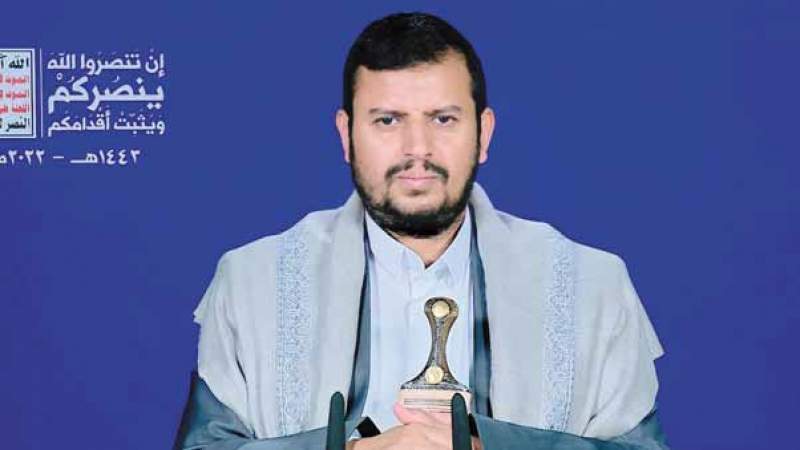 Yemen: The leader of the revolution, Sayyed Abdulmalik Al-Houthi, presented a historical documentary summarizing the steadfastness of Yemen and its capital Sana’a, in the face of US-Saudi aggression, and reflects in general the patient and steadfast Yemeni scene in the face of aggression.

His speech in the meeting with the leadership of the capital, Sana’a, on Wednesday, reminded the Yemenis that the truce experienced by the Yemeni field is a “temporary pause”, and that the other party’s talk about peace is just a monument to deception.

The field and practical data indicate the opposite of what they are saying as the US-Saudi aggression is preparing for a battle that seems to be decisive and will not have lines.

For this regard, Sayyed Abdulmalik warned against inaction on the national party in light of the truce, especially as the other side deals negatively. There is no commitment to the humanitarian aspect of the truce or its military aspect as defined by the truce, and in light of the unstoppable mobilization and recruitment of weapons by the US-Saudi aggression and foreign forces that have arrived to Aden, Mukalla, Mahra and the occupied Yemeni islands.

The leader reviewed what Sana’a had been subjected to since the beginning of the aggression, including the intensive airstrikes and missile attacks, in which the prohibited weapons were used.

He reminded of how the capital withstood the military campaigns to occupy it, as the US-Saudi mercenaries were 40 kilometers away from the capital, Sana’a, and how attempts were made to bring it down from the inside in December 2017, and how it was targeted by security and intelligence chaos through al-Qaeda and Daesh members who were directly supported by the Saudi regime and US intelligence.

Sayyed Abdulmalik spoke about all that suffering and seven years of aggression and siege with the taste of victory, as Sanaa bypassed with steadfastness, patience and solidarity all those conspiracies. The evidence of its victory is that it has become the largest population area and an advanced barrier to all the Yemeni people despite the targeting of residential neighborhoods by US-Saudi airstrikes.

He said Sana'a has become a model for coexistence between the people of the country and the necessity of preserving this creative model that the aggression seeks to destroy as a primary goal of its aggression against Yemen.

Sayyed confirmed that the enemies who wagered to resolve their battle and to reach Sana’a in two weeks to two months, after the eighth year came they were filled with despair and frustration, admitting their defeat.

The leader stressed that the control of Yemen by the coalition of aggression means its submission to the US and Israel, which no honest and free Yemeni would accept.

Sayyed Abdulmalik Al-Houthi laid out the features and lines of the next stage of the confrontation, which seem to be different from what Yemen knew during the previous stations of the aggression, as the aggression throws its last papers in the direction of a decisive battle in which it may not save a card but uses it harshly.

For decades, Yemen has been missing a leadership that, if it had existed, would have saved decades of regional and international oppression of Yemen and the theft of its wealth by tyrants and their rotten tools.

Between the speech of Sayyed Abdulmalik, in the second day of the aggression, in which he used his famous phrase to comment on those who want to subjugate Yemen to the occupier and invader, “in Yemen, this is not possible” and his speech last Wednesday, in which he said “Tell the Saudi Regime: They Won't Reach Sana’a, but Riyadh is within our Reach”, confirming that Sana'a is in a state of confidence of victory.