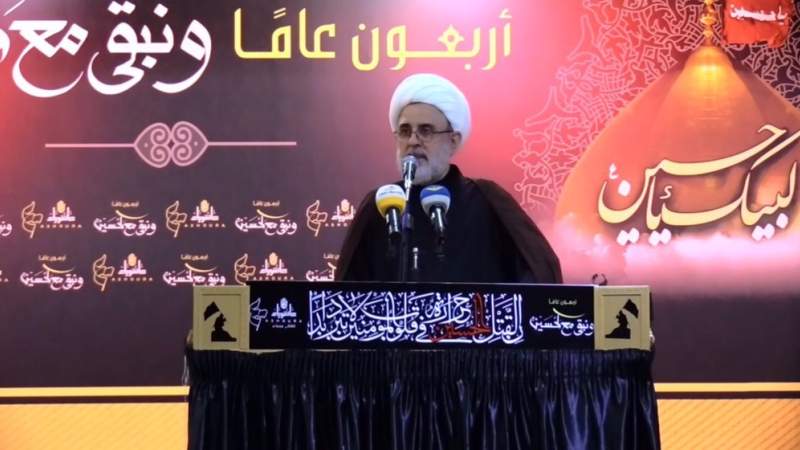 News - Middle East: A senior Hezbollah official has commended his group’s publication of a video showing Israeli vessels involved in offshore oil and gas industry at a disputed maritime area in the Mediterranean, stressing that Israeli officials will not sleep a wink if they find out about the actual extent of the Lebanese resistance movement’s military capabilities.

Sheikh Nabil Qaouk, deputy head of the executive council of Hezbollah, made the remarks at a ceremony in the southern Lebanese town of Bint Jbeil on Wednesday night.

“The video that Hezbollah’s War Media Department released a few days ago relayed a clear message to the Israeli enemy that the resistance movement is fully prepared, and has aimed its missiles at the Karish [gas field is disputed territory] and areas beyond that,” he pointed out.

The high-ranking Hezbollah official underscored that Israeli authorities will be gripped by fear once they find out about his group’s preemptive measures against the regime’s strategic energy and military installations.

“Lebanon previously used to beg for assistance from the United States. The equation has, however, changed at present, and it is now Israel that has to appeal and wait for US help in the face of Hezbollah,” Sheikh Qaouk said.

He said that Israeli prime minister Yair Lapid has lately asked Washington to work out a quick agreement with Lebanon regarding the demarcation of maritime borders.

“The appeal stems from their (Israelis’) fear about the prowess of Hezbollah resistance movement, and the fact that the group’s secretary-general Seyyed Hassan Nasrallah is absolutely right that all of Israel’s gas fields are under threat from his group’s missiles,” Sheikh Qaouk pointed out.

Hezbollah on Sunday morning published a video threatening the gas extraction infrastructure at the Karish offshore field, near a disputed maritime border between Lebanon and Israel.

The video footage, which also contains a rare glimpse of Hezbollah weaponry, was broadcast on Lebanon’s Arabic-language al-Manar television station.

It was issued by Hezbollah’s War Media Department, which the group uses to broadcast footage of military operations and battles, and contains images of ships involved in drilling for and extracting hydrocarbons, along with what appear to be their coordinates.

The video begins with the words of Nasrallah during a recent speech in which he warned that “playing with time is not useful” on the maritime issue.

Lebanese politicians hope that commercially viable hydrocarbon resources off Lebanon’s coast could help the debt-ridden country out of its worst economic crisis in decades.

In February 2018, Lebanon signed its first contract for drilling in two blocks in the Mediterranean with a consortium comprising energy giants Total, Eni, and Novatek.

Lebanon and Israel took part in indirect talks to discuss demarcation in 2020. But the talks stalled after Lebanon demanded a larger area, including part of the Karish gas field, where Israel has given exploration rights to a Greek firm.

The talks were supposed to discuss a Lebanese demand for 860 square kilometers (330 square miles) of territory in the disputed maritime area, according to a map sent to the United Nations in 2011.

However, Lebanon then said the map was based on erroneous calculations and demanded 1,430 square kilometers (552 square miles) more, further south, including part of Karish.