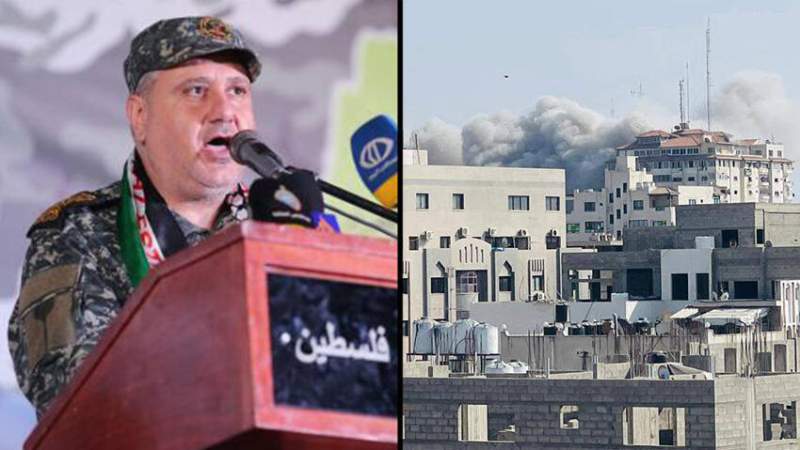 A blast could be heard in Gaza City, where smoke poured out of the seventh floor of a tall building. Health officials in the besieged enclave said one person was killed in the strike and 15 others had been wounded.

The Islamic Jihad confirmed the deceased is Tayseer Jabari, a high-ranking commander. Israeli media described him as the “successor of Islamic Jihad military chief Baha Abu al Ata”, who was martyred in an Israeli strike in 2019.

Occupation Home Front Command alerted Israeli settlers who live in towns within an 80 km radius of the Gaza Strip, including Tel Aviv, that there is a risk of rocket fire, Israeli media reported.

Shortly after the Al-Jaabari was pronounced martyred, the Islamic Jihad announced that the Israeli occupation military is launching a war, vowing to confront the new aggression.

In remarks to Al-Mayadeen, Nakhale stressed that there are no red lines in this battles, announcing that Tel Aviv is within the reach of resistance missiles.

He described the latest developments as an extension to ‘Operation Al-Quds Sword’, which lasted for ten days in May 2021.

He voiced confidence that the Palestinian resistance will triumph against the Israeli enemy, stressing: “The battle is to be or not to be.”

In remarks to Al-Manar, Hamas Spokesman Fawzi Barhoum stressed that the “Palestinian blood is a red line,” vowing that the Palestinian resistance will target Israeli soldiers and settler.

He clarified, meanwhile, that the Israeli enemy is the side who is to blame for the escalation, and that it “will pay the price.”

Tensions have been high for several days in Gaza and West Bank as occupation military raided Jenin camp on Tuesday, killed a Palestinian young man and arrest an Islamic Jihad commander Sheikh Bassam Al-Saadi along with his son-in-law Ashraf al-Jadaa.