In New Tragedy, Displaced People in Marib Living on Brink of Disaster 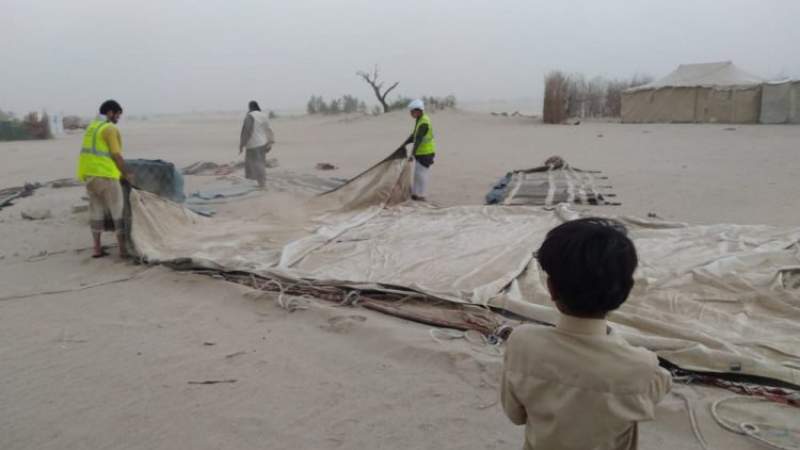 Yemen:  For a week, the displaced people in the Marib camps are suffering a tragic situation, as torrential rains uprooted their simple homes.

Local sources in Ma'rib governorate told the "Yemen Press Agency" that torrential rains in Ma'rib governorate, since last Thursday, uprooted the camps of displaced people in the areas of Al-Wadi, Al-Jufina and Al-Baqma in the city of Marib.
The sources indicated that the displaced have been living in the street, while the leaders of the pro-aggression government did not pay attention to them.
They confirmed that the camps contained about 8,000 displaced families from the Nihm district, as well as the displaced in Al-Mail and Al-Wadi district, which contained hundreds of families of US-Saudi fighters in Al-Jawf governorate, who are living in humanitarian conditions. The tragedy was exacerbated by the rains, which caused the collapse of dozens of mud houses and dilapidated tents from time to time.
In this context, the Yemeni Red Crescent provided, Saturday, 500 food bags to the stricken families in the camps for the displaced in the city of Marib.
The International Organization for Migration said last Thursday, in a brief statement on the Twitter platform: "Sudden floods in Marib continue to cause severe damage to the shelters of thousands of displaced people."
IOM and Yemen Red Crescent teams are on the ground providing health care, shelter, sanitation and emergency relief items to more than 3,400 families.
Most of the displaced families in the camps of Al-Madina and Al-Wadi districts lack the minimum necessities of living, as some IDPs sleep on the ground and spend difficult nights in the desert climate, which is very cold due to wind and rain.
A recent report in Marib Governorate, east of Yemen, revealed a large spread of deadly and infectious diseases within the camps for the displaced, amid the complete absence of any medical clinics and health care inside the camps.
The Displaced Persons Management Unit in Marib says that only two camps out of 194 have health units, while the rest of the camps lack health units and do not receive medicine in a timely and prompt manner.
Recent statistics of the Executive Unit for the Management of IDPs Camps in the city stated that (348) camps lack health services, (69%) of the total camps, noting that 26,102 individuals in those camps suffer from infectious diseases such as malaria, watery diarrhea and skin diseases.
In addition 26,253 displaced persons have chronic diseases, while 56,037 others have disabilities, suffering from health problems in hearing, sight and inability to move, according to the report.
Translated by Almasirah English website
#US_Saudi_Aggression #Marib #Displaced People 22-08-13