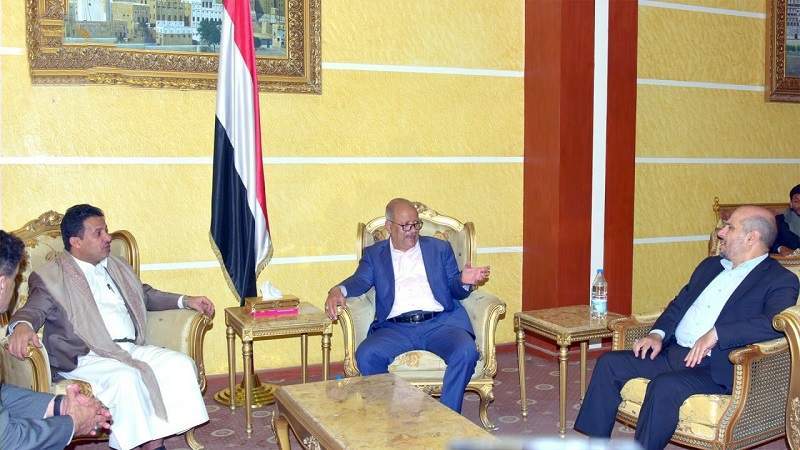 Nuaimi's remarks came during his meeting with the representative of the Islamic Jihad Movement Dr. Ahmed Baraka, where the meeting reviewed the developments on the Palestinian arena and the victories achieved by the resistance and the Palestinian people over the Zionist enemy.

He pointed out the importance of strengthening the unity of the Palestinian, Arab and Islamic ranks in the face of Zionist enemy by unifying the media discourse and political positions in support of any efforts being made to liberate from the arrogant countries.

For his part, the representative of the Islamic Jihad Movement appreciateed the support of Yemen, the leadership and people of the Palestinian cause.

"We appreciate the support of the revolutionary leadership, the Supreme Political Council and the Yemeni people, who support the Palestinian cause permanently, and protect the Palestinian resistance until victory is achieved over the enemy," he said.

He gave a brief presentation on the battle of the United Fronts, which the Palestinian people fought with Zionist enemy, through which they were able to thwart the enemy's plots aimed at separating the Palestinians at the geographical, humanitarian and popular levels.

During large mass rallies in the capital, Sana’a, and other Yemeni Provinces, the Yemenis show solidarity with the Palestinian people. The Palestinian issue was largely dominated by the Ashura march this year.

Yemen has condemned the Israeli regime's crimes and aggression against the Palestinian people amid the inaction of international organizations.

In response to the airstrikes Islamic Jihad fired hundreds of rockets during the flare-up .

Forty-nine Palestinians, including 17 children and 14 members of Islamic Jihad, were killed, and several hundred were injured in the air attacks, which ended with an Egyptian-brokered cease-fire.

A day after the cease-fire, Israeli forces killed three Palestinians and wounded dozens in a shootout that erupted during an arrest raid in the West Bank city of Nablus.