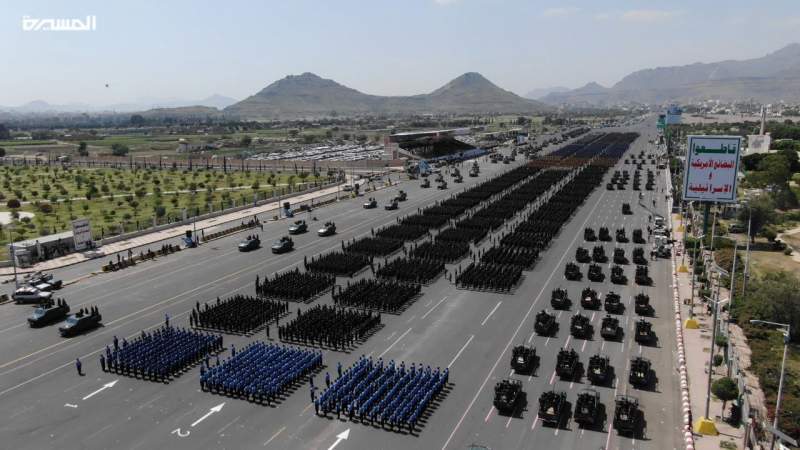 Yemen: After eight years of maintaining security for more than two-thirds of the population in the free provinces and thwarting the plans and attempts of the US-Saudi aggression to disrupt security,  the leader of the revolution, Sayyed Abdulmalik Al-Houthi, announced that Yemen was ready for cooperation and security coordination with its neighbors in the Arab and Islamic world.

The announcement of the Leader did not come haphazardly, neither in terms of timing nor in terms of capabilities. It was launched during a security parade in the largest squares of the capital, Sana’a, after eight years of war and targeting of the security services in particular.  Over 20,000 personnel and more than 1,100 vehicles and  armored vehicles participated in the parade.

Observers considered the parade as the culmination of the achievements of the security forces that managed to normalize security and stability in exchange for the massive security chaos that had prevailed in the country before the September 21 revolution.

The Ministry of Interior confirmed that its total security achievements since the beginning of the aggression amounted to 200,353 security achievements. 347 “terrorist” sabotage schemes, which the aggression had moved using its mercenaries and criminal cells to implement in all free governorates, were thwarted. 2,700 explosive devices that had been planted by the affiliated criminal individuals of the US-Saudi aggression to target citizens, were dismantled.

The security achievement was not limited to confronting “terrorism” and confronting the tools of aggression, but also included various fields, as 148,770 different criminal offenses were seized, with a seizure rate of 94%.

The Ministry of Interior seized 565 organized cells, while 11,396 seizures were carried out for crimes of smuggling and drug promotion, 317 smuggling operations of Yemeni antiquities were thwarted, and more than 11,914 missions were carried out to secure official and popular events, in addition to thousands of achievements.

In contrast to the achievement of the stable security situation in the free provinces despite the security war, aggression and suffering of the siege, the UAE-Saudi occupied southern provinces witness chaos, assassinations, bombings and almost daily clashes, as well as the spread of Takfiri groups and gangs.

Likewise, what it was witnessed by all Yemeni provinces before the revolution of September 21, Yemen was subject to external tutelage and the United States of America was running the war on so-called terrorism. 1,364 assassinations occurred at the height of the US intervention between 2011 and 2014. These numbers are from a security statistic for the period from 1990 to 2014.

The September 21 revolution revealed that Washington’s war against al-Qaeda and ISIS is nothing but a media bubble, and the Yemeni experience has proven that Washington is unreliable to fight these groups, but rather uses them as a pretext to penetrate the countries of the region and fight their opponents.

The security forces and the army when liberating sites of the Daesh individuals found food and military aid from the American Relief Agency belonging to these groups.

More than two decades have passed since Washington declared the global war on what it called terrorism after the events of September 11. A war that the US was keen to be the only international player that transcends borders and holds its strings, and under this slogan several Arab and Islamic countries were destroyed and the sovereignty of other countries was violated. Yemen was among the most prominent targeted countries, however, it chose to confront the US project, after the revolution of September 21, and won it.

Today, while it is leaning on its unprecedented achievements, its high security capabilities, and its elimination of Takfiri groups, Sana’a, with its revolutionary leadership, announced its willingness to provide its accumulated experiences to help serve the security of the Arab and Islamic world. Will other countries benefit, or will the US intervention remain, in return, more violation of sovereignty and the expansion of the "terrorism" area?