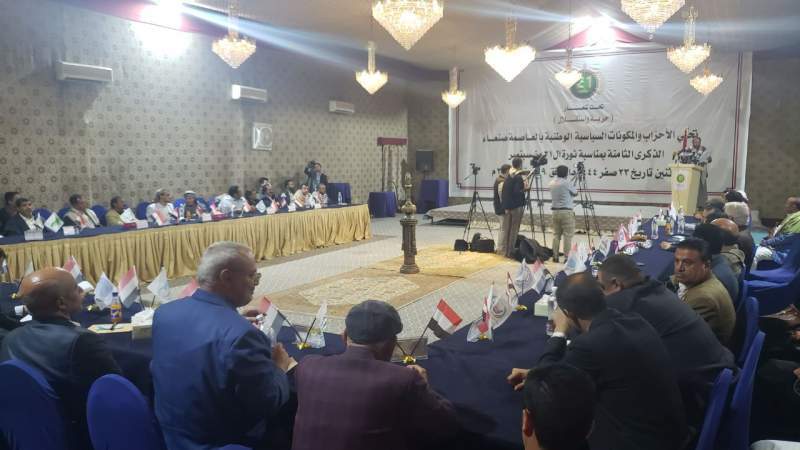 News - Yemen: National Political Parties held a festive event in the capital Sana'a on Monday on the occasion of the eighth anniversary of the September 21 revolution.

“The September 21 revolution was not part of a regional polarization or a response to external dictates,” member of Ansarullah's Political Bureau Fadel Abu Talib confirmed in a speech during the event.

Abu Talib noted that the September 21 revolution is present on the side of justice and equity for the southern cause in light of the territorial integrity of Yemen.

He also stressed that the September 21 revolution achieved the political independence of Yemen, militarily it built a national army, and nationally it preserved the stability of the position towards Palestine.

For his part, the Secretary-General of the General People's Congress Ghazi Al-Ahwal considered that the meeting of political parties is an expression of national unity, stressing the strengthening of the political front.

Al-Ahwal indicated that the leaderships of Ansarullah and the People's Congress stand in the face of all conspiracies of aggression to divide the internal ranks, and that the national partnership today is more solid.

“We stand by the Palestinian people in liberating their land and reject all forms of normalization.” he said, praising the stances of the people of the southern and eastern governorates in the face of the US-Saudi-Emirati occupation.

Meanwhile, the Joint Meeting Parties affirmed in its speech that September 21 is a white revolution and its principles were embodied in the Peace and Partnership Agreement.

It pointed out that the worst conspiracies prior to the September 21 revolution were the targeting of the security establishment, as not a week passed without bombing or an assassination.

In turn, the Anti-aggression Parties stressed that the September 21 revolution reshaped the political scene and exposed the hypocritical political forces.

It emphasized that the September 21 revolution is a victory for all the Yemeni people and a pivotal point in dropping the guardianship and changing the shape of the region.

For its part, the Southern Peaceful Movement affirmed that the September 21 revolution is the true echo of the Yemeni people.

“It is a pure and sincere revolution in its various aspects,” it said, praising the courageous decision of the leadership and the Army in the face of aggression, occupation to liberate the land.

It considered that the chaos, collapse and looting of Yemen's wealth in the southern and eastern governorates confirms that the aggression is the cause of the suffering of the Yemeni people.

The final statement of the Conference of Political Parties stressed that the revolution was launched at a time when the global arrogance regimes tampered with the security and capabilities of Yemen. It noted that the US-Saudi aggression had desperately tried to separate the Yemeni people from the Nation's issues,

It reiterated adherence to "the issues of our Nation and our principled and authentic position, especially the Palestinian cause, and that we are an integral part of the axis of jihad and resistance."

The statement renewed the absolute, principled rejection of the humiliating positions of some Arab regimes involved in the path of humiliation and rushing in the so-called normalization with the temporary entity that usurped the land of Palestine.

“The liberation of every inch of our land in all the occupied governorates and the preservation of the independence of our country is a covenant we made and a promise we pledge to our people and we will not rest until this is achieved for all parts of our beloved Yemen by land, sea and air,” the statement said.

The Political Parties also expressed their categorical rejection and strong condemnation of the maneuvers carried out by the countries involved in aggression led by the US in the Red Sea, considering this an infringement on the sovereignty of Yemenis over their lands and waters.

It urged "those involved in the aggression's row to return to the path of righteousness and join the national row and not to antagonize their people to serve the enemies of their country and nation."

It also called on the Saudi-led aggression to take advantage of the opportunity of the truce that may not be repeated, to lift the unjust siege on Yemeni ports and airports, and to withdraw all their forces from the entire territory of Yemen with a commitment to compensation and reconstruction.

In conclusion, the statement called on the Yemeni people to be fully prepared in case the aggression commits any foolishness that violates the temporary truce and to be present to supply the fronts with men and money until the clear and complete victory is achieved.