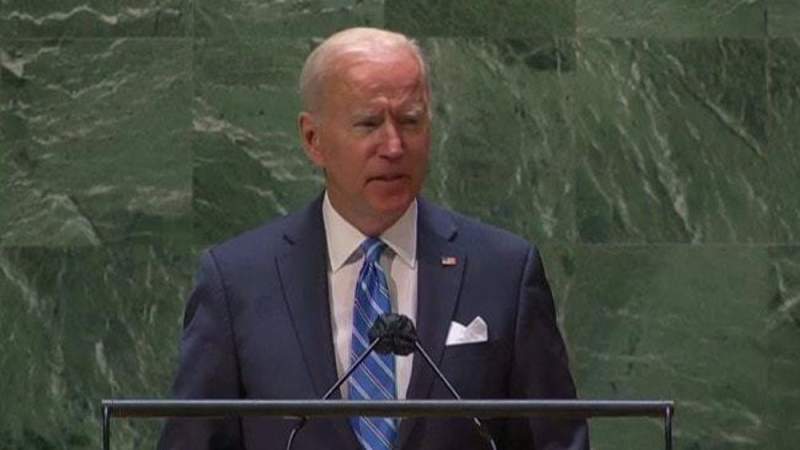 News - World: US President Joe Biden accuses Russia of "violating the core tenets of the United Nations Charter” through its military operation in Ukraine, hours after President Vladimir Putin accused the West of engaging in nuclear blackmail.

Biden made the remarks in New York during his address to the 77th session of the UN General Assembly on Wednesday.

"Let us speak plainly. A permanent member of the United Nations Security Council invaded its neighbor -- attempted to erase the sovereign state from the map," he alleged, criticizing Russia for starting, what he called, an unprovoked war.

Biden's criticism of Russia came as resentment has built over the West's massive spending on weapons for Ukraine.

Russia began its military operation on February 24, saying it was aimed at “demilitarizing” the eastern Ukrainian region of Donbas, which is made up of the Donetsk and Lugansk republics.

Announcing the operation, Putin said the mission was meant to “defend people who for eight years are suffering persecution and genocide by the Kiev regime.”

On Wednesday, Putin announced calling up 300,000 reservists to fight in Ukraine.

He then expressed support for calls made a day earlier by pro-Russian officials in Donetsk, Luhansk, the southern Ukrainian region of Kherson, and the southeastern region of Zaporizhzhia for referendums on whether the foursome regions should join the Russian Federation.

The Russian president said, "If the territorial integrity of our country is threatened, we will use all available means to protect our people - this is not a bluff," asserting that Russia had "lots of weapons to reply."

During his Wednesday's UN address, the US president insisted that the cautionary words issued by Putin amounted to making "reckless" and "irresponsible" threats to use nuclear weapons.

"Again, just today, President Putin has made overt nuclear threats against Europe, in a reckless disregard for the responsibilities of the nonproliferation regime," Biden said.

Putin denounced the West for using "nuclear blackmail" against Russia, referring to reciprocal accusations made by Russia and Ukraine of targeting a nuclear power plant that is located in Zaporozhzhia.

He also accused officials of the countries that belonged to the US-led military alliance of NATO of making statements about "the possibility and admissibility of using weapons of mass destruction against Russia - nuclear weapons."

The Russian president denounced the US, the UK, and the European Union for pushing Kiev to "transfer military operations to our territory."

Ukraine has targeted the Russian territory on many occasions, using long-range weapons that have been supplied to it by the West.