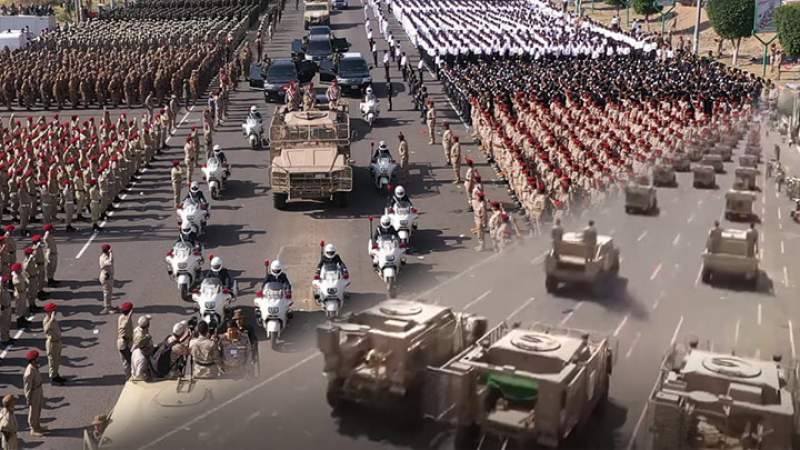 News - Yemen: The military parade organized by the Ministry of Defense, Wednesday, on the occasion of the eighth anniversary of the September 21 revolution, included the show of several types of armored vehicles seized by the Yemeni army, during the confrontation with the US-Saudi aggression.

The head of the Supreme Political Council, Field Marshal Mahdi Al-Mashat, arrived in the parade Square before its start on an American-made (Oshkosh) armored vehicle, which the armed forces seized on the battlefronts.

Yemeni Armed Forces revealed on Wednesday new missile, naval and air systems during a military parade held in the capital Sana’a on Wednesday to mark the eighth anniversary of the September 21 Revolution.

The Navy Force revealed a homemade Asif missile, which works with solid fuel, and with an intelligent guidance and control system, and the weight of its warhead exceeds half a ton. It also revealed advanced warships of the Asif-1, Asif-2, Asif-3, Tooufan-1, Tooufan-2, Toufan-3, and navigation boats.

The Navy Force explained that the new boats are characterized by their high speed and ability to maneuver, and carry a variety of weapons and offensive and defensive tasks against fixed or moving targets.

In addition, the Air Force revealed a Khatif-2 aircraft, equipped with a target sensing system, and carried out offensive tactical tasks, and was used against the mechanisms and armored vehicles of the aggression. It also revealed a Mersad-2, a reconnaissance plane, that takes off vertically and has the ability to fly for eight hours.

The Air Defense, in turn, revealed the Miraj missile, which was developed from the Badr-P1 solid-fuel missile, with two thermal and radar systems, and is not affected by interference. It also unveiled the Saqr missile, which has a speed of up to 200 meters per second.

The Air Defense revealed three systems which are Sadiq, Haidar, and Radar-P19. They are detection and tracking systems for hostile targets.

In addition, the Armed Forces revealed the Hani armored vehicle in memory of the martyr Hani Tomer, which is offensive and defensive, characterized by flexibility when moving, speed and when engaging.

The war, which has been enjoying unstinting arms, logistical, and political support on the part of the United States, has killed tens of thousands of Yemenis and turned the entire country into the scene of the world’s worst humanitarian crisis.

Facing up to the invasion, Yemen’s Army and Popular Committees have vowed not to lay down their arms until the country’s complete liberation from the scourge of the invasion.

In the space of a single month, the joint forces have carried out several rounds of retaliatory strikes against targets in Dubai and the Emirati capital.

Sana’a has also warned countries involved in aggression that the counterstrikes would be exceedingly “painful” if they failed to wind down their involvement in the US-backed war.