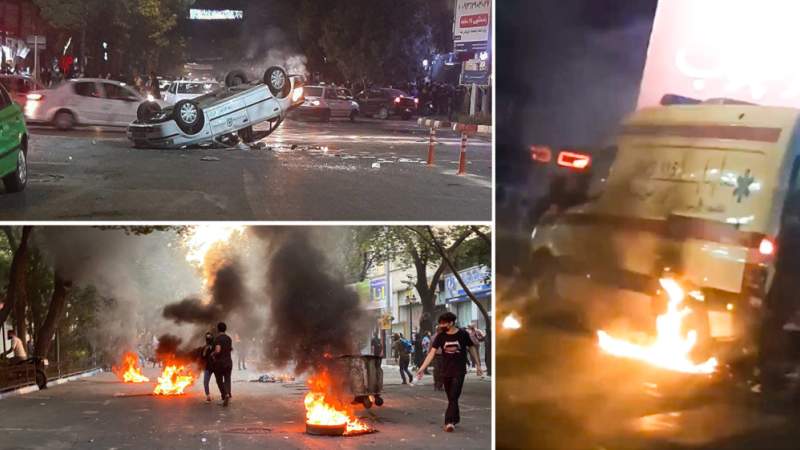 News - World: The tragic death of a 22-year-old Iranian woman in police custody, still shrouded in mystery, has fueled angry protests in recent days. Social media has also been abuzz with evocative hashtags calling for "justice."

The people of Iran are entitled to know what happened to Mahsa Amini, and the circumstances in which she died. And the authorities are legally and morally obliged to probe the matter without fear or favor and douse the raging flames of anger with justice and accountability.

Having said that, the manner in which the protests appear to have been hijacked by rabble-rousers, both inside and outside the country, points to something deeply sinister. And it's not the first time. These agent provocateurs have always tried to seize such opportunities to foment chaos and disorder.

Setting ablaze the country's flag, ransacking mosques and banks, attacking ambulances, or beating a random policeman on the street — these actions can't be attributed to those who genuinely seek justice and accountability. There is more to it than meets the eye.

Hours after the news broke out on Friday, Iran's President Ebrahim Raeisi, who was in Uzbekistan for the Shanghai Cooperation Organization (SCO) summit, instructed the interior ministry to launch a meticulous probe into the incident. He later spoke to the deceased woman's father too.

The top judiciary official, Mohseni Ejei, in his remarks on Monday, said he had asked the judicial bodies to "thoroughly investigate" the case. On Tuesday, parliament speaker Mohammad Baqer Ghalibaf also joined the chorus, saying the top legislative body has put the probe into the 22-year-old woman's death on top of its agenda.

As is evident, there is no attempt to brush the incident under the rug or hoodwink people with cock and bull stories. There is no denying the fact that the woman died in police custody. But the investigation is still underway, so jumping the gun is imprudent.

The CCTV footage released by the police shows the deceased woman collapsing after a brief exchange with a policewoman inside a police station. There appears to be no physical contact, which has led to speculation that she could have had underlying health issues. She was later pronounced dead at a hospital.

The preliminary investigation carried out by the parliament has also ruled out the use of force on the 22-year-old from Kurdistan, pointing to her medical history and a brain surgery years ago. The final report though is still awaited.

The interior ministry is also expected to submit its report in a few weeks, which will shed more light on the events leading up to her tragic death. Truth must prevail and that's something everyone agrees on.

Meanwhile, Western media outlets are busy spinning the tragic event to push their "regime change" agenda in Iran, dubbing it as "murder" and accusing the authorities of "torture", even before the investigations conclude. The lop-sided coverage of Amini's death has again demonstrated how the corporate Western media and governments work in tandem to obfuscate the truth.

The cold-blooded, broad daylight murder of Palestinian journalist Shireen Abu Akleh was termed as "death" while the death of Mahsa Amini has been described as a "murder." That was the Israeli regime. This is the Islamic Republic of Iran.

Many videos have been doing rounds on social media, some of them either fake or old, circulated with the intention to stoke tensions at this sensitive time. Interestingly, many notorious Iran-bashers in the West have also jumped on the bandwagon to push their nefarious agendas.

That's exactly what the father of the deceased woman, Amjad Amini, also cautioned about in an interview with the Tasnim News Agency on Monday, disassociating his family from the conspiracy theorists and unruly mobs. Justice, he declared, is all he wants.

What's also interesting is how some Western leaders have suddenly turned into "well-wishers" of the people of Iran, the same leaders who refuse to lift or ease sanctions that have killed tens of thousands of Iranians over the years. The same leaders who have provided patronage to anti-Iran terrorist groups as well as the illegitimate regime that has killed the country's leading scientists over the years.

Make no mistake: They can't be the well-wishers of the people of Iran. What they seek is disorder and chaos. Before harping about human rights in other countries, they could first set their own house in order. For instance, in the US, 1,055 fatal police shootings were recorded in 2021, and before that 1,020 in 2020, with Black Americans being prime targets. Human rights?

The likes of Antony Blinken, Rob Malley and ilk should be more concerned about human rights abuses in their own country before issuing grandstanding lectures to others. Americans are in no position to claim the moral high ground. Their hands are soaked in the blood of innocents in Iraq, Afghanistan, Palestine, Yemen, and Syria.

Iran's foreign minister Hossein Amir-Abdollahian quite rightly hit back at the US officials in a tweet on Tuesday, asserting that human rights are of "inherent value" to the Islamic Republic "unlike those who use it as a tool against adversaries."

"Instead of shedding crocodile tears, US must end #EconomicTerrorism," wrote the top Iranian diplomat after the White House National Security Council dubbed the Iranian woman's death as an "appalling and egregious affront to human rights".

Justice will prevail in Mahsa Amini's case, and it should, but those tens of thousands in the US, or Afghanistan and Iraq, the victims of American terrorism, will never see justice. As simple and blunt as that.