US Warned Russia of Consequences of Using Nukes: Report 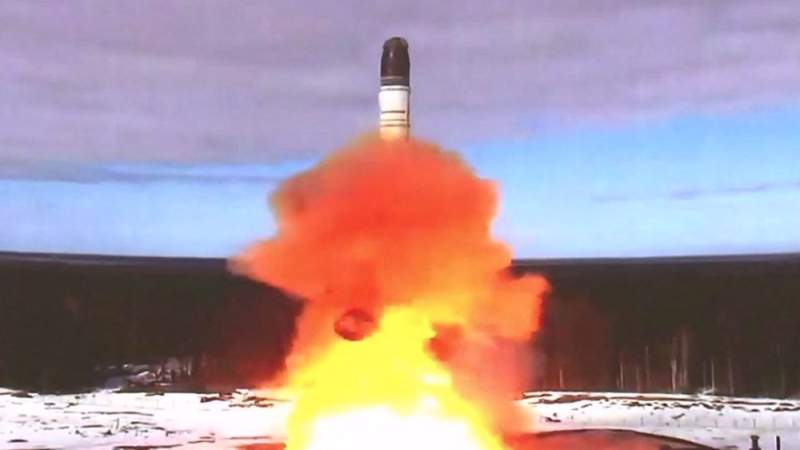 News - World: The United States has privately warned Russia for several months of "consequences" for any use of nuclear weapons in Ukraine, according to American officials, while Moscow has advised Washington of its nuclear “red line”.

Unnamed officials told The Washington Post that the Biden administration has publicly been purposefully vague about what those consequences would be in an attempt to build concern among Russian leaders, a method of nuclear deterrence called “strategic ambiguity.”

US President Joe Biden has warned Putin against thoughts of using nuclear weapons in Ukraine, adding that it would “change the face of war unlike anything since WWII.”

Biden said last week Moscow would become a global pariah if it uses weapons of mass destruction on the former Soviet state.

In an interview with a US media outlet, Biden was asked what his message to Putin would be if he felt the best way to operate in Ukraine was to use nuclear or chemical weapons against Kiev's forces.

The US president replied "don't, don't, don't", and adding that such a decision would "change the face of war unlike anything since World War Two".

If Russia launches a nuclear or chemical attack on Ukraine, it would “become more of a pariah in the world than they ever have been,” and America’s response would depend “on the extent of what they do,” Biden said in the interview with CBS News.

In response to Biden's warning, Putin's spokesman Dmitry Peskov gave reporters this short answer on Saturday, "Read the doctrine. Everything is written there," RIA Novosti reported.

The Russian nuclear doctrine allows the country to use nukes in two conditions. First, when "Russia  or its ally [is under attack] with the use of mass destruction weapons," and second, "when the very existence of the state is under threat."

Russia’s former President and current deputy chairman of the Russian Security Council Dmitry Medvedev stoked announced on Thursday that Russia would be willing to use “strategic nuclear weapons” to defend itself.

“The protection of all joined territories will be significantly strengthened by the Russian Armed Forces,” wrote Medvedev on Telegram.

“Russia announced that not only mobilization capabilities, but also any Russian weapons, including strategic nuclear weapons and weapons based on new principles, could be used for such protection.”

“It is hard to imagine that even nuclear strikes will allow Russia to break Ukraine’s will to resist,” the two wrote for state news outlet Ukrinform.

“But the threat that will emerge for the whole of Europe cannot be ignored.”

Russia began its “special military operation” in Ukraine on February 24, with a declared aim of “demilitarizing” Donbas, which is made up of the Donetsk and Luhansk self-proclaimed republics. Back in 2014, the two republics, which are predominantly Russian-speaking, broke away from Ukraine, prompting Kiev to launch a bloody war against both regions. The years-long conflict has killed more than 14,000 people, mostly in the Donbas.

Since the onset of the February conflict between the two countries, the United States and its European allies have unleashed an array of unprecedented sanctions against Russia and poured numerous batches of advanced weapons in Ukraine to help its military fend off the Russian troops, despite repeated warnings by the Kremlin that such measures will only prolong the war.

Medvedev’s comments came after US Secretary of State Antony Blinken accused Vladimir Putin of committing “aggression” in Ukraine and demanded the Russian president be held to account for it.

The top US diplomat accused the Russian leader of adding "fuel to the fire" with recent steps including announcing a partial mobilization in Russia, where Putin said that his country is now fighting “the entire Western military machine” in Ukraine.

While Russian Foreign Minister Sergei Lavrov said the US and its allies are victims of "Russophobia."

"There's an attempt today to impose on us a completely different narrative about Russian aggression as the origin of this tragedy," Lavrov told the Security Council on Wednesday.

"The United States and their allies with the connivance of international human rights organizations have been covering the crimes of the Kiev regime," Lavrov said.