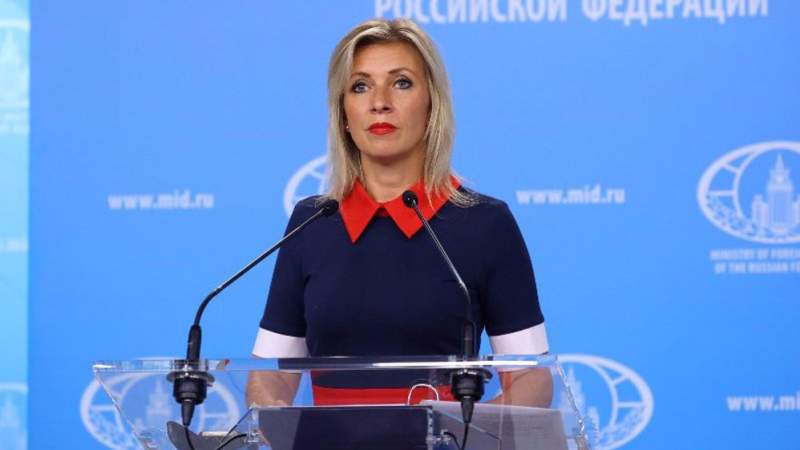 In a press conference on Thursday, Russian Foreign Ministry spokeswoman Maria Zakharova said after failing to secure such a pretext at Zaporizhzhia nuclear power plant, Zelensky has now turned to its next scheme, which is using "dirty bomb" in Ukrainian territory to frame the Kremlin.

"Let me recall Zelensky's quote from his online message to a Western audience. Do you remember what he said? It’s no use waiting. A first strike must be carried out against Russia. He called on NATO to deal such first strikes.,"

Zakharova said Kiev had for several months bombarded Zaporizhzhia, the largest nuclear power plant in Europe, to force the West to take a series of steps, hoping to eventually bring the world to the brink of a nuclear catastrophe.

However, Moscow managed to frustrate Zelensky's attempts at creating such a pretext, she said, adding that now the Ukrainian president will activate its Plan B if the Western countries “do not continue their support at the same level and do not increase it.”

Zakharova warned that Zelensky's second plan is the "dirty bomb."

While it does not have the devastating effects of a nuclear weapon, a “dirty bomb” could still contaminate large swathes of land with radioactive waste.

The Kremlin even brought the case of the so-called bomb to the United Nations. Kiev and its Western allies strongly reject the allegation.

Russia says might shoot down Western satellites used by Kiev

Separately on Thursday, Konstantin Vorontsov, a senior Russian Foreign Ministry official, said the Ukrainian government is being helped by Western satellites in the war, warning that this is "an extremely dangerous trend."

"Quasi-civilian infrastructure may be a legitimate target for a retaliatory strike," he told the United Nations First Committee. The West's use of such satellites to support Ukraine is "provocative," he said.

Without mentioning any specific satellite companies, Vorontsov said Moscow is "talking about the involvement of components of civilian space infrastructure, including commercial, by the United States and its allies in armed conflicts."

US or commercial satellite providers have not yet reacted to Vorontsov's comments.

Russia is in possession of a significant offensive space capability, just like the United States and China. Back in 2021, Russia destroyed one of its own satellites with an anti-satellite missile.

In August, Moscow alleged that Washington was directly involved in the Ukraine war after Vadym Skibitsky, Ukraine's deputy head of military intelligence, said Ukraine was using US-supplied High Mobility Artillery Rocket System (HIMARS) launchers. The official said at the time that the claim was based on what he described as excellent satellite imagery and real-time information.

Elsewhere in her remarks on Thursday, Zakharova said Russia would retaliate if its state and citizens' assets were confiscated by the European Union.

She described as an act of "stealing" the possible confiscation of Russian assets in the European bloc. Some European leaders are reportedly suggesting such confiscation. "The EU judiciary refuses to protect Russians' property."

Kremlin: Kiev withdrew from talks with Moscow on Washington’s ‘order’

Moscow said on Thursday that Russian President Vladimir Putin believed Ukraine pulled out of the peace talks with Russia in March on an "order" from Washington.

“The text was ready… And then suddenly the Ukrainian side went off the radar, the Ukrainian side declared its unwillingness to continue negotiations,” Kremlin spokesman Dmitry Peskov said at a press conference. Putin considered it “obvious” that the decision to stop talks “occurred on an order from Washington,” he said.

Peskov's comments came just a day after Guinea-Bissau’s Umaro Sissoco Embalo, the current chief of the West African bloc ECOWAS, said in the Ukrainian capital that the Russian leader, whom he had visited earlier, had “expressed the idea that he is ready for negotiations” with his Ukrainian counterpart.

Asked about Embalo's remarks, Peskov said, “We are ready to ensure our interests at the negotiating table."

“We want this, but in this case, we are talking about a complete unwillingness on the part of Ukraine,” Peskov said, adding that there was “no specific message” for Kiev.

On Wednesday, Zelensky dismissed any possibility of peace talks with Moscow.