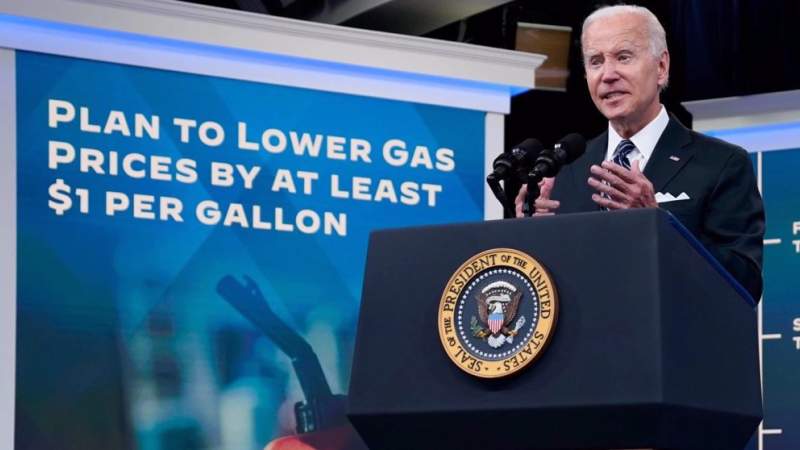 News - World: With the price of gasoline a major concern for voters, US President Joe Biden has heightened efforts to lower the costs for struggling Americans, pushing an aggressive energy policy that industry experts say is “costly and dangerous” and nothing but a “desperate political” move to win Tuesday’s midterm elections.

Fearing that high gas prices could hurt Democrats at the ballot box, Biden announced late last month a decision to tap into the US Strategic Petroleum Reserve, releasing 15 million barrels from the emergency stockpile in an effort to drive down gas prices.

“What is true is that depleting the U.S. Strategic Petroleum Reserve (SPR) to lower gas prices is a desperate political effort to win the midterm elections,” Steven Winberg, the former assistant secretary of Fossil Energy at the US Department of Energy, wrote in an article published by The Hill.

Winberg argued that the policy will not have a meaningful impact on gas prices.

“By the end of 2022, the Biden administration will have released 180 million barrels of oil from the SPR, amounting to a mere nine days of U.S. oil consumption — hardly enough to lower gas prices but enough to hurt one of our most important national security assets,” he said.

President Biden’s decision to release from the strategic petroleum reserve follows a similar move nearly a year ago, and a failed effort to persuade the Organization of Petroleum Exporting Countries (OPEC) to increase production. OPEC-- led by Saudi Arabia-- declined Biden’s request, and instead announced its largest supply cut since 2020, prompting calls for a reevaluation of US relations with Saudi Arabia, the world’s top oil exporter.

Winberg said the strategic oil reserve was put in place to protect the United States from crude oil supply disruptions and natural disasters like hurricanes. “But when our nation’s crude oil reserves are depleted and not refilled, the U.S. becomes further dependent on our adversaries for our energy needs,” he warned.

Biden claims that he intends to refill the strategic reserve at an estimated cost of $23 billion, but experts are skeptical Congress would give him the money.

In addition, Winberg said, “Biden’s politically-motivated SPR releases hurt its physical infrastructure; the Reserve was not made for repeated releases and refills.” “The Biden administration’s use of the SPR for political purposes is reckless at best and, at worst, violates the legal intent behind its creation,” he pointed out.

Biden went a step further last week in his efforts to tame the gasoline prices, now hovering around $3.78 per gallon, by calling on Congress to consider a windfall profits tax on oil companies. He accused the oil giants of “war profiteering” at a time when American families are struggling with high energy prices.

“Their profits are a windfall of war,” the president said last Monday, referring to Russia’s war in Ukraine, which sparked a flurry of Western sanctions that, among other things, reduced oil supply. “It’s time for these companies to stop their war profiteering.”

The warning to oil companies, however, appeared mainly symbolic as moving to impose any new taxes on oil profits would need to clear the congressional hurdle. That would prove difficult, especially on such short notice before the midterms, as Democrats control both chambers of Congress by slim margins—a status that could easily change in favor of Republicans on Tuesday.

Inflation and the economy consistently rank as the top issue for voters, leaving Democratic strategists anxious whether Biden’s initiatives would be enough to save the party on Election Day.