How Long the US-Saudi Siege, Killing Innocent Civilians in Yemen Will Last? 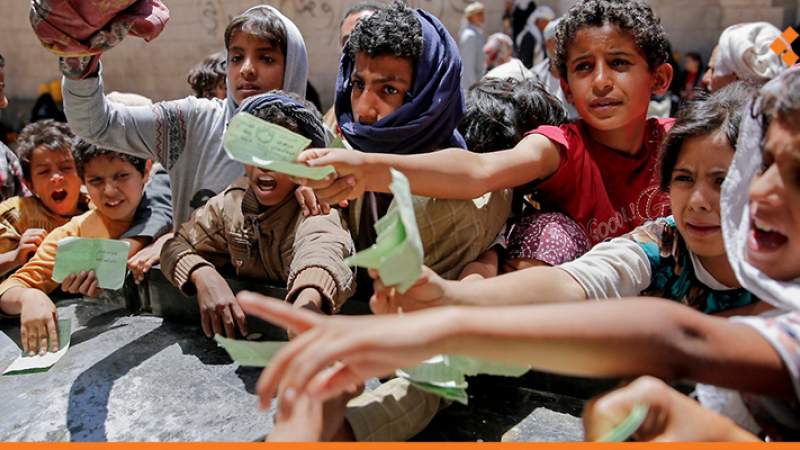 Yemen: In the past eight years, the US-Saudi aggression has exercised all forms of pressure on the Yemeni people with crimes of murder, destruction and unjust siege. The humanitarian situation in Yemen is in constant decline.

The specter of hunger continues to threaten the lives of tens of thousands of families in the besieged country for more than six years. What makes the humanitarian crisis worse is that the UN has reduced its aid to more than 30% this year, under the pretext of lack of funding, and the sharp rise in food and fuel prices as a result of the Ukrainian crisis and its repercussions on food security and global energy markets.
Recently, the International Committee of the Red Cross stressed Yemen's need for an "urgent political solution to end the suffering” caused by the US-Saudi aggression and siege.
"Two out of three Yemenis are considered food insecure, that’s about 19 million people," said Martin Schweib, Director of Operations at the International Committee of the Red Cross, on Twitter, during his visit to Yemen.
“Even more of them lack access to basic health care, despite all of this, Yemen is too often out of the spotlight”. He stressed the need to ensure that the support received from donors and partners continues to be able to continue their work, as he claimed.

This does not absolve the UN organizations of humanitarian responsibility, and it will not hide the involvement of many of them in corruption and the theft of aid from the mouths of the hungry. In most cases, spoiled food is imported and the operational budgets of some projects are approved more than those allocated to the beneficiaries, in addition to the continuous disregard for the causes of the war, which created the worst humanitarian disaster in the world.

For eight  years, the medical sector has borne the consequences of the intense bombing, siege and war crimes committed by the coalition of aggression. However, the blockade appears to be the most important factor affecting health in Yemen.

Yemen, according to the Health Minister, is facing a high rate of fetal abnormalities, death during childbirth and the number of premature infants as a result of the aggression using prohibited international weapons and siege that prevented the entry of medicines. Reports of the ministry  say that more than 27 children out of 1,000 births die annually.

According to the ministry’s spokesman: “because of the siege a child dies every 5 minutes, more than 8000 women die annually, and more than 2.6 million children suffer from malnutrition.”

In June 2021, Dr. Najeeb Al-Qubati indicated that 1.5 million suffer from chronic diseases and 32,000 of them need to travel to receive treatment, noting that 5,000 patients with kidney failure need kidney transplants, and the closure of Sana’a airport threatens their lives.
He pointed out that over 3,000 children have congenital heart defects and need to travel for treatment, 500 cases of final liver failure require liver transplantation, and 2,000 cases require corneal transplantation. All of them were registered in the Medical air bridge that was promised to travel from Sana’a Airport. A significant increase in oncology patients is observed, as over 72,000 patients registered with the National Cancer Center, which lacks modern medicines and equipment to treat them.
The siege caused a shortage of 50% of the medicines required for oncology patients, and also prevented the arrival of shipments of medicines and damaged many of them and increased their prices due to deliberate and arbitrary obstacles, he added.

Most of the population in Yemen lacks health care because of the destruction of health facilities in their areas or because of the lack of energy, medicines and medical equipment as a result of the siege imposed on Sana’a International Airport.

The economic war waged by the US-Saudi aggression against the Yemeni people has caused a rise in the prices of basic foodstuffs and social services, which has led to an increase in poverty and the risk of starvation for millions of people. The war has had dire consequences on the country's economy, causing a drop in its gross domestic product from $35.7 billion in 2014 to $20.1 billion in 2019.

Reports confirm that the per capita GDP growth rate has begun to improve since 2014, the year during which Yemen witnessed the outbreak of the September 21 revolution. The economic effects of the war and the blockade imposed on Yemen also included the so-called economic output losses, which amounted to $88.8 billion during 2019.

As a result of the war and siege, the Yemeni economy lost nearly $90 billion during the period from 2014 to 2020, as it lost a large part of the capital for the public and private sectors, which represents the summary of work and economic achievements over the past decades.

Expectations indicate that the economy of Yemen, which is going through very critical conditions, after the rates of cumulative decline in macroeconomic indicators reached their worst stage, will continue to decline as long as the war and siege continue.

Preliminary estimates of the World Bank indicate that the financing requirements necessary for the recovery of the Yemeni economy are estimated at 88 billion dollars, at 17.6 billion dollars annually for a period of 5 years. The real GDP of Yemen shrank by about 46 percent during the period 2015-2020, and the cumulative losses in the real GDP amounted to about $49.8 billion during the same period.

The World Bank estimated that between 71 to 78 percent of Yemenis, representing 21 million people, were included below the poverty line at the end of 2019.

Receiving salaries, traveling from Sanaa International Airport and other Yemeni airports without obstacles are the simplest rights of the Yemeni citizen, the rights guaranteed by all laws, the Charter of the UN and human rights treaties and conventions.

The temporary UN-sponsored truce that lasted for six months in Yemen, concluding that all foreign interference, politically and militarily, must be ended to ensure a lasting truce and lasting peace. It also confirmed that no peace will be achieved without an end of the US-Saudi aggression, lifting the comprehensive siege and implementing urgent humanitarian steps that address the repercussions of the humanitarian catastrophe.

During the six months of the truce, there was not any seriousness to address the humanitarian issue as an urgent priority. The US-Saudi aggression bet on the economic card, the continuation of the siege is clear after all their other aggressive plans have failed.

The US-Saudi aggression, with UN complicity, is still evading the implementation of humanitarian and legal entitlements, foremost of which is the paying employee salaries and entering fuel ships to the port of Hodeidah.