IRGC Chief: US’ Evil Dream of Disintegrating Iran Will in No Way Come True 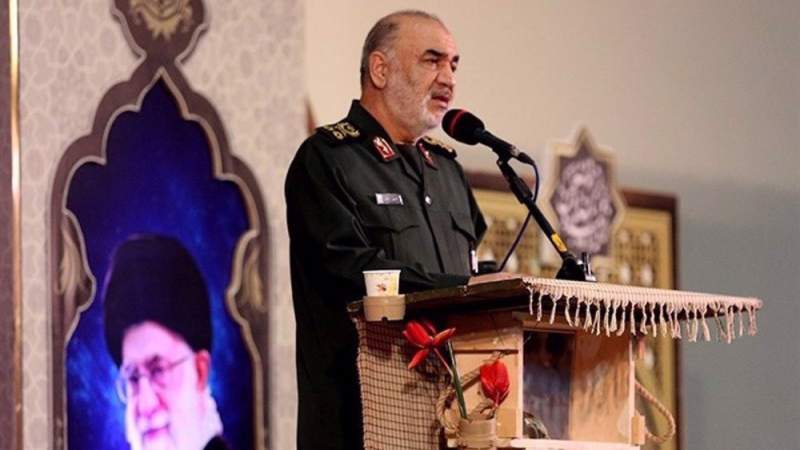 News - Middle East: The chief commander of the Islamic Revolution Guards Corps (IRGC) has highlighted the Iranian nation’s resolve to foil plots by the United States and Western governments in recent violent riots across the country, saying Washington intends to foment further unrest and see Iran disintegrated but its evil dreams will in no way come true.

Major General Hossein Salami made the remarks in a ceremony held in commemoration of Qom’s martyrs in the holy Iranian city on Thursday.

Pointing to the latest riots in Iran and the West’s unwavering support for the unrest, Salami said, “We are now witnessing a political arrangement on the global arena,” with the US, the UK, Germany, France, Israel, Saudi Arabia and others having come to fight in the evil front.

Stressing that the enemy’s formation against Iran shows the depth of a “massive conspiracy” against the Iranian nation, the IRGC chief said, “Our high-ranking martyrs stood up to the enemy barehanded, but managed to weaken the enemy … with confidence and strong hearts.”

The enemy thinks that it can expose this glorious revolution to harm by bringing a few fooled people to the stage, Salami said, while the Iranian nation is alive and the enemy has had disturbing dreams.

The commander said that the US seeks to prevent the progress and development of Iran, saying, “The US likes to see our streets smoke-filled and on fire; it likes us not to send spaceships to the sky; it likes us to be needy, poor and crippled. It would like our patients not to have access to medicine.”

Underlining that Washington likes to see Iranian youths killed in the street, Salami said, “The US likes to divide our nation, it likes to disintegrate Iran, and these evil dreams will never come true. The Iranian nation is standing firm.”

Foreign-backed riots broke out in Iran in mid-September after the death of Mahsa Amini. The 22-year-old fainted at a police station in Tehran and was pronounced dead three days later in hospital. An official report by Iran’s Legal Medicine Organization has concluded that Amini’s death was caused by illness rather than alleged blows to the head or other vital body organs.

The European Union and some Western countries have imposed sanctions on Iran over its approach toward the recent riots. Iran, in turn, announced tit-for-tat sanctions against institutions and individuals in the European Union due to their deliberate actions in support of terrorism and terrorist groups.

Earlier in the month, Iran’s Intelligence Ministry said the United States and the United Kingdom were “directly” involved in the unrest, adding that dozens of terrorists affiliated with the Israeli regime and anti-revolution groups have also been detained in the unrest.