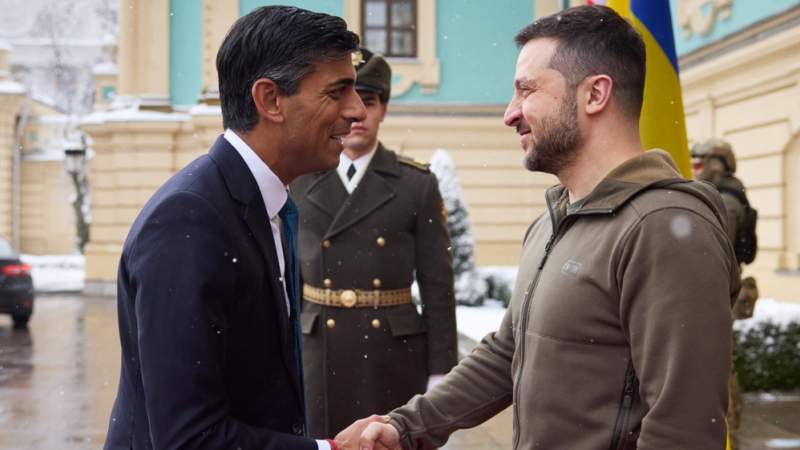 News - World: British Prime Minister Rishi Sunak has pledged to provide an extra 60 million dollars in military assistance to Ukraine, saying his country would stand by Kiev’s side “until Ukraine has won” the war with Russia.

Sunak met President Volodymyr Zelensky in a visit to the Ukrainian capital, Kiev, on Saturday. He said Britain “will continue to stand with you... until Ukraine has won the peace and security it needs and deserves.”

He announced a new air defense package worth $60 million (£50 million), according to a Downing Street statement. The package includes "120 aircraft guns, radar and anti-drone equipment," said the UK prime minister.

Zelensky, for his part, praised a "meaningful and useful visit for both our countries" during a joint press conference. He said the duo discussed "the possibilities of protecting European and Ukrainian energy security" and “our capabilities in protecting the Ukrainian sky, as well as defense cooperation in general.”

On Twitter, Zelensky said, “With friends like you by our side, we are confident in our victory.”

Ukraine has been at war with Russia since President Vladimir Putin declared a “special military operation” in late February. The Russian president said the campaign was to “de-Nazify” Ukraine.

Ever since, the Unite States, Britain and their Western allies have supplied Kiev with military aid, despite warnings from Russia that the weapons were being used to strike residential areas of the Russian-held Donbass and prolong the war.

The UK has sent more than £2.3 billion in military assistance to Kiev, including more than 5,000 NLAW anti-tank weapons and M270 multiple launch rocket systems.