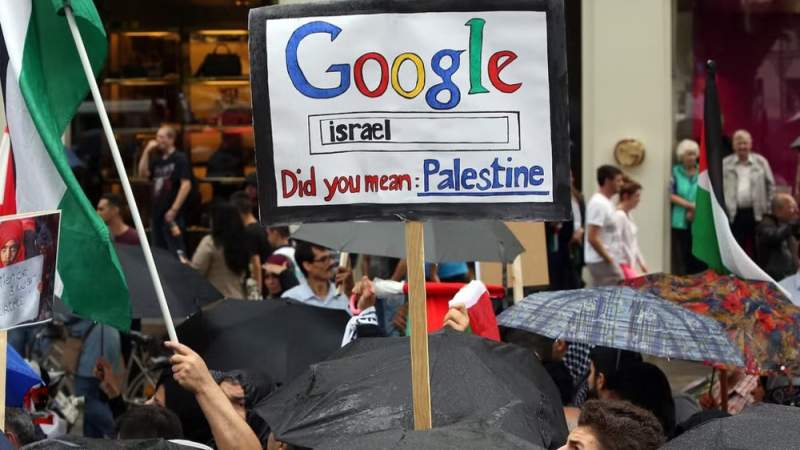 News - World: A Palestinian activist has said that tech companies including Amazon and Google, are working with the Israeli military, and aiding in human rights violations and the colonization of the Palestinian people.

Huda Ammori, a co-founder of the direct action network Palestine Action, was making a reference to Project Nimbus during Press TV's Palestine Declassified, aired on Sunday.

The notorious Project Nimbus is  Google’s $1.2bn artificial intelligence and surveillance contract with Amazon and the Israeli military.

"It is important to acknowledge that tech companies are now becoming more powerful than many governments. And when those tech companies are working with the Israeli military, they're essentially aiding in all of the violations against human rights and the colonization of the Palestinian people," she said.

Ammori, who has conducted extensive research and campaigns targeting British complicity with Israeli apartheid, described the recent collaboration as a means for "encouraging the further blockades of the people of Gaza" and "constant military attacks" against Palestinians.

While many have no choice whether to use Google or Amazon because so many third-party platforms use them, the weight and the size of the oppressors working against the Palestinians continue to increase, she rued, adding that as a result "we have to increase our grassroots power against the trend."

An interesting twist in the Project Nimbus contract is that it contains an anti-BDS clause.

While BDS stands for boycott, divestment, and sanctions, anti-BDS clauses, laws, and resolutions oppose the boycotts of Israel.

The tech companies are barred from withdrawing the services from any institution; this would have certainly been inserted to enforce integration with the Israeli military, regardless of how horrific its crimes against Palestinians will become.

Ammori explained that BDS pressures the Israeli regime into complying with Palestinians' demands, which include ending the colonization and occupation of Palestinian territories including lifting the blockade of Gaza, allowing Palestinian refugees to return to their homes, which they were forced out of by Israel, and for Palestinian citizens to have equal rights as their Jewish counterparts.

However, she regretted, an anti-BDS clause means going against those demands which are enshrined under international law and human rights conventions and to further perpetuating an apartheid system.

She further stressed that by working with the Israeli military Google and Amazon are now basically "advocates for apartheid."

Elsewhere in her remarks, Ammori recounted how her startup Palestine Action accounts on Facebook and Pay Pal were removed as Elbit Systems, an Israel-based international defense electronics company, threatened to file lawsuits against the online platforms.

"About 10 different tech companies and third-party platforms have removed Palestine Action [account] or outright told us that we cannot use that platforms. And we actually discovered, it was because Elbit lawyers were writing to them directly and that they were scared of a lawsuit and going bankrupt," she said.

She added that "Elbit Systems, Israel's largest arms firm, used illegal warfare to blackmail companies into removing any support for our movement. But it has consistently failed to do so. And actually, the fact that they are forced into spending so much money on these lawyers to do so is a testament to the success of Palestine Action."

Google's integration with the Israeli military has been a steady development in which several key Israeli lobby groups have played an active role.

Jewglers, a group of employees within Google, that has been accused of driving right-wing ideologies, and actively surveilling Arab and Muslim employees, has successfully forced Google management to apologize for a donation it gave to the Black Lives Matter movement, on the basis that groups within the coalition had stated their solidarity with Palestinians.

Moreover, another key entanglement Google has had with Israeli intelligence came with the founding of a tech hub by the name Team 8.

Team 8 CEO and co-founder is Nadav Zafrir, a former commander of the infamous signals intelligence unit at 8200 in the Israeli military. Team 8 was co-founded with Eric Schmidt, who at the time was the executive chairman of Google.

Israel lobby group, the Anti-Defamation League (ADL) is a select contributing member of YouTube's trusted flagger program, meaning that Google allows it to regulate content on the most used video service in the world.

Google is also a member of the ADL Silicon Valley anti-cyberhate working group.

Another part of this integration has been the Startup Nation Central organization set up by Republican party donor Paul Singer.

The stated purpose of the organization is to combat BDS by feeding big tech jobs into Israel, but also by feeding Israeli workers into big tech companies.

It is through organizations like Startup Nation Central, that a huge mass of former Israeli intelligence agents are working inside Google today.

Today, Google stands as a technological weapon against Palestinian liberation.

The above-mentioned outfits are relatively anonymous to most people.

Ammori explained that the outfits are aware that if they were exposed they would be widely condemned,  therefore they stay away from public attention and operate more in the shadows.

"By placing unit 8200 offices into companies like Google, Israel is essentially infiltrating spaces, which harvests a lot of data; these are power hubs for data collection, it means that our data, my data or anyone else's data, who works with Palestinian people, is exposed to people who may continue to work on behalf of Israel in order to perpetuate its oppression against the Palestinian people," she added.

Ammori also said that there is "institutional Zionist bias" inside Google, stating that Google is increasingly going to be used as another tool for the Zionist project.

"These companies are trying to cash in on colonization and oppression of the Palestinian people and as long as we allow that to continue, we're going to see more and more powerful big tech companies, which normal people across the world are using day to day, also cashing in on that oppression," she concluded.