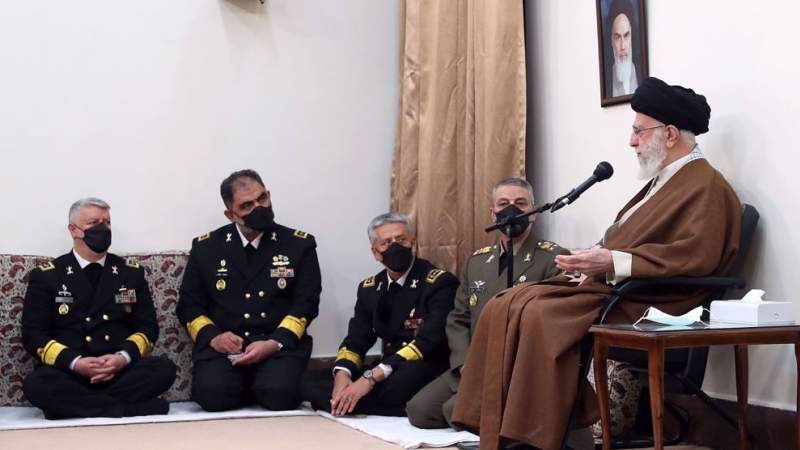 News - Middle East: Leader of the Islamic Revolution [in Iran] Ayatollah Seyyed Ali Khamenei has called for the all-out promotion of combat capabilities of the Islamic Republic of Iran Navy, stressing the need for the naval force to continue its presence in international waters and high seas.

Ayatollah Khamenei, who is also Commander-in-Chief of the Iranian Armed Forces, made the remarks in a meeting with a number of high-ranking Iranian Navy commanders in the capital Tehran on Monday.

The Leader added, “The huge capacities of the sea must turn into [a component of] the country’s public culture.”

Highlighting the long history of Iranians’ presence at sea, which helped transfer the Islamic and Iranian culture and civilization to other parts of the world, the Leader said, “Despite this long history and [having] long coasts in the north and especially in the south of Iran, the culture of taking advantage of maritime opportunities has been ignored in the country and must turn into a part of the people’s public culture.”

Ayatollah Khamenei also called for the continued presence of Iranian naval units in distant seas and international waters, adding, “Bolstering the Armed Forces’ cooperation with the administration and other branches [of the Islamic establishment] will lead to [better] understanding and will facilitate the work [that must be performed by them].”

During the meeting, Iranian Navy Commander Rear Admiral Shahram Irani presented a report on the measures and plans of made by his force in different spheres.

He added that the advanced unmanned aerial vehicles will also enable the Iranian Navy’s offshore units to cover areas within an operational radius of at least 2,000 kilometers.

Irani highlighted that Iranian naval units are now present in the Indian Ocean, the Atlantic Ocean as well as the Pacific Ocean, and are safeguarding merchant containers and oil tankers owned or leased by the Islamic Republic during their missions in international waters.

The top commander emphasized that the Iranian Navy enjoys the capability to fly hundreds of drones at once to carry out various missions.

Back in mid-July, Iran's Navy upgraded its force by incorporating a special division tasked with transporting and operating various drones.

The first drone carrier division of Iran's Navy, which is comprised of different surface and subsurface units, was unveiled in a ceremony in the international waters of the Indian Ocean.

Iranian military experts and engineers have in recent years made remarkable breakthroughs in manufacturing a broad range of indigenous equipment, making the armed forces self-sufficient.

Iranian officials have repeatedly underscored that the country will not hesitate to strengthen its military capabilities, including its missile power, which are entirely meant for defense, and that Iran’s defense capabilities will be never subject to negotiations.