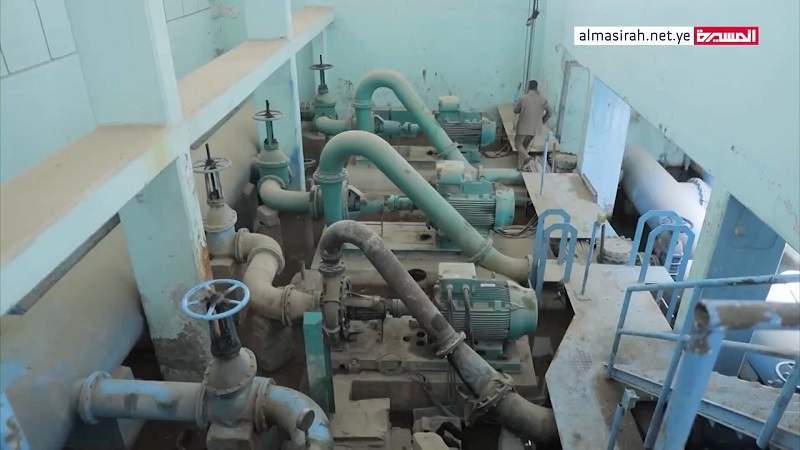 News - Yemen: Al-Masirah channel conducted a field investigation about the equipment and materials that US-Saudi aggression bans from entering through the various ports of Yemen, and its effects on the suffering of citizens.

The Director General of the Local Corporation for Water and Sanitation, Mohammed Al-Shami, confirmed that the US-Saudi aggression has been preventing the entry of types of water and sanitation equipment into Yemen for years.

"We sent repeated letters to the UN organizations about the danger of preventing these equipment and tools, which lead to a deterioration in the reality of water and sanitation in Yemen," he said.

He stressed that the impact of continuing to prevent the entry of this important equipment is the difficulty in expanding the water networks and the ability of the corporation to operate or rehabilitate the stalled wells.

The investigation confirmed that these aggressive measures caused the deterioration of water networks, machinery and equipment, and the scarcity of emergency maintenance and planned renovation.

The investigation showed an aspect of the daily suffering experienced by the people, young and old, to obtain a few liters of water, in a shameful crime.

A number of citizens confirmed that the US-Saudi aggression is targeting the people of Yemen through war and siege and through the crises it causes, whether in water, medicine or food.

Recently, President Mahdi Al-Mashat stressed the importance of making extra efforts by the UN to end the injustice against the Yemeni people, and that it bears responsibility to stop all forms of siege imposed on the country.

This came during his meeting with the United Nations Resident Coordinator for Humanitarian Affairs "OCHA" in Yemen, William David Grisley.

President Al-Mashat pointed out the need for the UN to bear its responsibility in empowering the Yemeni people with their wealth, in order to achieve the payment of salaries to all employees, as it is natural human rights without which peace cannot be achieved.

He explained that the Yemeni people are suffering from the largest humanitarian crisis in the world in light of the continuation of aggression and siege on it, and the interruption of the salaries of all state employees, while US-Saudi aggression is looting Yemen's oil and gas wealth.

Al-Mashat called on the UN to seek to alleviate the increasing human suffering of the Yemeni people as a result of the continued US-Saudi aggression and Siege.