Parliament Warns Against Signing Any Loans in Name of Yemen 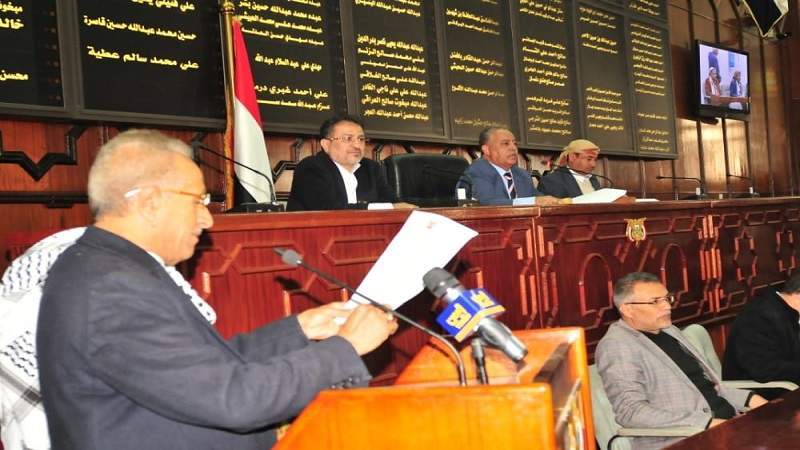 News – Yemen: The Yemeni Parliament renewed its warning to the pro-aggression government against signing suspicious agreements and deals, the most recent of which was the signing of two agreements, the first with the International Monetary Fund worth $300 million and the second with the Arab Monetary Fund, worth $1 billion.

During the meeting, Tuesday, the members of the Parliament indicated that the aim of these loans is to load the Yemeni people with additional burdens in the framework of the economic war waged by the aggression coalition and its tools against the country, and to deceive the continued plundering of the Yemeni people's oil wealth. and gas.

They stressed that the pro-aggression government was not satisfied with plundering Yemen's sovereign wealth of oil, gas and marine wealth, but rather went beyond that to flood the Yemeni people with absurd loans, considering these agreements void as they are not based on any constitutional or legal framework.

They pointed out that the Yemeni people will not bear any consequences for these loans, because their returns are being tampered with in suspicious payments and movements of the pro-aggression government, without paying the salaries of state employees or improving basic services for citizens.
The members of the Parliament renewed the warning to countries and parties that identify with the coalition of aggression and its mercenaries in signing such agreements and suspicious deals, stressing that Yemen retains its legal and constitutional right to sue those parties.

They explained that these agreements violate the constitution and the Yemeni laws in force, which stipulate that they be presented to the Parliament, whose constitutional headquarters is in the capital, Sana'a, for discussion and approval.

On Sunday, the Undersecretary of Ministry of Finance, Ahmed Hajar said, "The pro-Saudi Government agreement with the Arab Monetary Fund cannot be accepted because it is illegal, and aim of the last loan is to flood Yemen with loans targeting the Yemeni economy".

He stated that the projects that will be financed from the Arab Monetary Fund loan are not known, and it will serve the US-Saudi aggression, not the Yemeni society. He pointed out that all economic policies pursued by the countries of aggression in Yemen violate the laws.

The Undersecretary of the Ministry of Finance went on to say that borrowing from the Arab Monetary Fund is going to the largest lone yet, and the interest rate in it is many times the loans from international institutions.

Recently, The Central Bank issued an important statement regarding the approval of the International Monetary Fund to support the account of the Central Bank branch in Aden with an amount of $300 million from the special drawing rights of Yemen.

The statement stressed that the decision of the International Monetary Fund reveals the contradiction of its policies and decisions and the duplication of its dealings with the same issues according to political agendas, pointing out that the US-Saudi aggression seek to implement their plans towards Yemen, by providing funds illegally to finance military operations and the war on Yemen.

The statement also indicated that the Central Bank demanded the provision of management of the rights of withdrawal units through a third party to ensure that the value of these units is used to finance commodity imports, and the allocation of the equivalent in Yemeni riyals to pay the salaries of state employees.

The statement added, "We demanded to stop any disposal of the Special Drawing Units of the Republic of Yemen, until the end of the aggression against Yemen, in order to ensure that the entire Yemeni people benefit from the drawing rights units."

The statement warned that: "In the event that the International Monetary Fund rejects any of our demands, we reaffirm our total rejection of any decision taken by the Fund regarding the Special Drawing Rights of the Republic of Yemen."

The statement stressed: "We release our responsibility from any burdens that will result from the decision of the International Monetary Fund in the event that it rejects our demands."

The Central Bank statement affirmed that it reserves the legal right to hold accountable and prosecute any entity or party that works, facilitates, or contributes directly or indirectly to the exploitation, waste and appropriation of the rights of the Yemeni people.