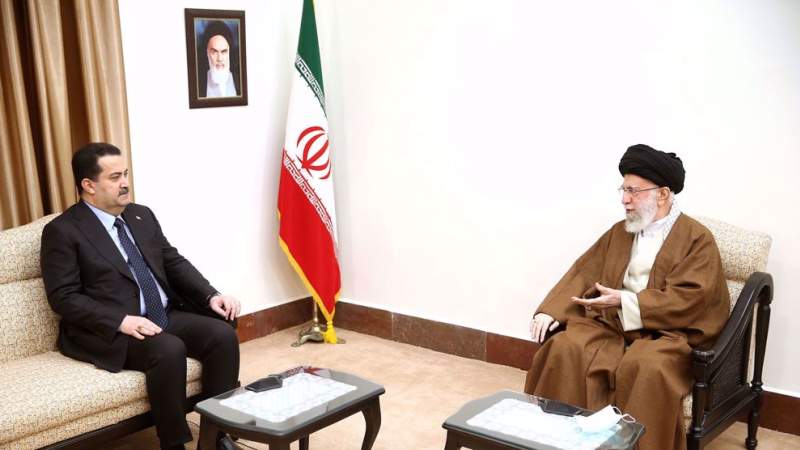 News - Middle East: Leader of the Islamic Revolution Ayatollah [in Iran] Seyyed Ali Khamenei says anything that may disrupt Iran’s security will inevitably impinge on Iraq as well, calling on the Baghdad government to exercise greater sovereignty over areas in the country’s semi-autonomous Kurdistan region.

Ayatollah Khamenei made the remarks in a meeting with visiting Iraqi Prime Minister Mohammed Shia' al-Sudani and his accompanying delegation in the Iranian capital city of Tehran on Tuesday evening.

The Leader then pointed to earlier statements by senior Iraqi officials that the Baghdad government will not allow the Arab country’s soil to be used as a staging ground to launch attacks on neighboring states in accordance with the Iraqi constitution.

“Unfortunately, this menace is cropping up in some areas of Iraq. The only solution is for the central Iraqi government to exercise greater sovereignty over those areas,” he said.

The Leader noted that Iran believes that the security of neighboring Iraq is equivalent to the Islamic Republic’s own security, emphasizing that Tehran will confront any party intending to disrupt the security of the Arab nation.

Ayatollah Khamenei also congratulated Sudani on his election, and wished him success in elevating Iraq's standing to a level worthy of the Arab country’s civilization and history.

He stated that Iraq’s progress and its higher position at the global stage is in the best interests of Iran.

Ayatollah Khamenei described Iraq as the best Arab country in the West Asia region in terms of natural and human resources as well as cultural, historical and civilization background.

“In spite of such a background, Iraq has not yet been able to attain its high and true position,” he said, stressing the need for cohesion and unity among various Iraqi political groups plus maximum utilization of the young Iraqi generation in order to achieve the desirable goal.

Ayatollah Khamenei said Iraq’s development would of course draw the fury of certain parties who may not want to exhibit it openly, calling on Baghdad to rely on the Iraqi nation in the face of enemies’ plots.

The Leader also underlined the necessity of implementing the agreements signed between the two countries, particularly those in the field of trade cooperation, transit of commodities and railroad transport.

Sudani, for his part, hailed the strategic and historical relations between Iran and Iraq, pointing to the joint campaign against the Daesh Takfiri terrorist group as a prominent example of such a fact.

He also paid tribute to Lieutenant General Qassem Soleimani, commander of the Quds Force of Iran’s Islamic Revolution Guards Corps (IRGC), Abu Mahdi al-Muhandis, the second-in-command of Iraq’s Popular Mobilization Units (PMU), referring to the two fallen anti-terror commanders as another illustration of amity between the Iraqi and Iranian nations.

Sudani stressed the new Iraqi administration is determined to bring into force the agreements already signed between Tehran and Baghdad, and further expand bilateral relations, especially in the field of trade transactions.

“The security of Iraq and that of Iran are interconnected. Under the [Iraqi] constitution, we will not allow any party to use the Iraqi soil as a ground for undermining the security of others,” the Iraqi prime minister said.