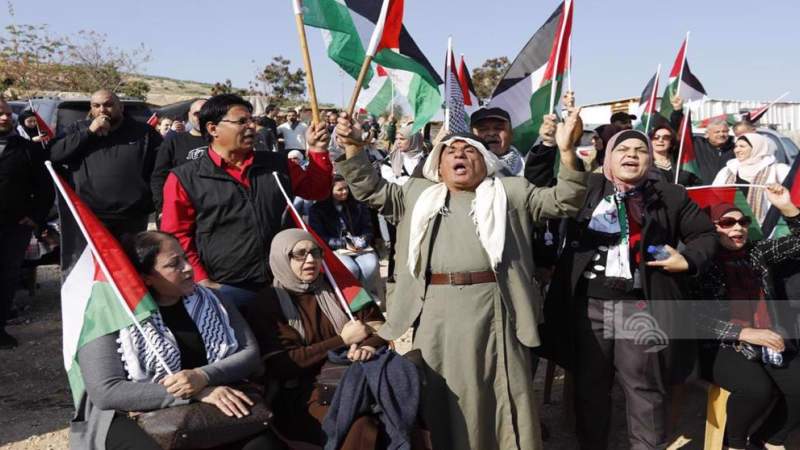 News - Middle East: Palestinians have protested in Khan al-Ahmar against an Israeli plan to evacuate the Bedouin village, which lies in the occupied West Bank near al-Quds, with the aim of constructing new settlements.

“We came here to challenge Ben-Gvir’s decision and the decisions of all of the right-wing government,” Palestinian activist Khairy Hanoun, who was at the protest on Monday, said, in reference to far-right Israeli minister Itamar Ben-Gvir, who vowed to push ahead with the village’s forced evacuation.

“We came here to tell them, you demolished our villages, you demolished our cities and our homes, but you will not demolish our perseverance,” he told Al Jazeera. Palestinians will keep rebuilding it, even if the Israelis “demolish it 100 times,” he said.

Meanwhile, Eid Jahalin, who described himself as a spokesperson for the village, told the TV network the Israeli practice of demolitions are "constantly happening across all of Palestine."

“Since 1967, there have been military orders for demolishing homes, closed military zones and others, and then these areas are transformed into illegal settlements and nature reserves,” Jahalin said at the protest. “Our fate is to remain in this area,” Jahalin said. “Whoever thinks that it is just Khan al-Ahmar – there are demolitions in the Jordan Valley, demolitions in Masafer Yatta, in al-Quds city – it is something constantly happening across all of Palestine.”

He underscored the importance of the village as it lies near a highway that connects East al-Quds to the Jordan Valley where Israel aims to expand and link settlements, effectively cutting the West Bank into two. “Our main message is to the Palestinian leadership: … If this village is uprooted. we will have the northern West Bank and the southern West Bank,” Jahalin said.

Israel routinely demolishes Palestinian houses in the West Bank and East al-Quds, claiming the structures have been built without the so-called Israeli permits, which are almost impossible to obtain. They also sometimes order Palestinian owners to demolish their own houses themselves or pay the costs of the demolition if they do not.

The legal adviser for the Palestinian Authority’s Committee against the Wall and Settlements says the PA would not allow the village to be demolished. “This is Palestinian land. It is private Palestinian land,” Maarouf Rifai said. “There is no excuse for the Israeli government, other than to develop the ‘Greater al-Quds' plan and to link the settlements surrounding East al-Quds in order to clear this area from Palestinian Arabs. We are here to raise our voices to say that we will not allow this to happen.”

More than 600,000 Israelis live in over 230 settlements built since the 1967 Israeli occupation of the Palestinian territories of the West Bank and East al-Quds. All Israeli settlements are illegal under international law. The UN Security Council has condemned Israel’s settlement activities in the occupied territories in several resolutions.