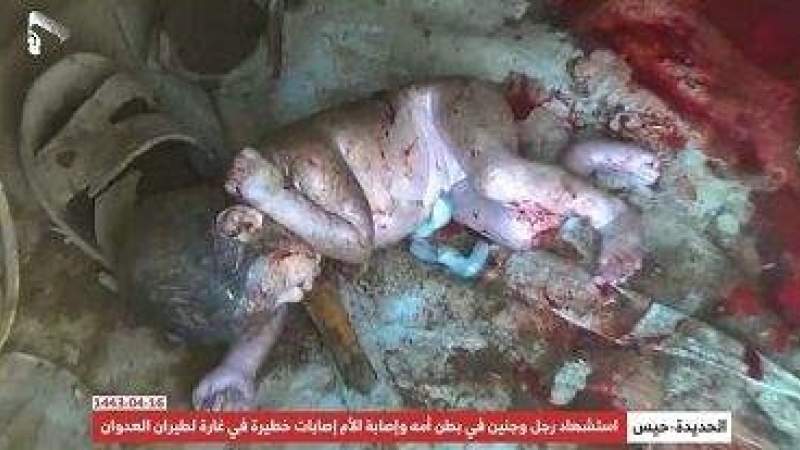 Yemen - A Story in Picture: This is Samira Saeed Salem, the mother whose abdomen was cut in a US warplane's raid and delivered her dead fetus to the ground a few days before he descended there with joy, gratitude and life.

The image of the fetus lying dead on the ground overlapped in its formation, the horror of American crime and the periodicity it reached, and the extent of the crime that tyrants throughout history had not preceded.

America left its signature on the body and soul of this fetus that has not yet breathed life.

Samira clings to life, and the shrapnel of the US warplane attack tampered with her body, causing pain and health problems, which exacerbated her pain by the siege of the aggression and prevented the arrival of medicines to Yemen.

Samira's pain was compounded by the death of her husband, Mahfouz Abdullah Sherian, as a result of the raid, as they were preparing to receive the firstborn, who descended into the world in this painful way, bearing in his wounds the imprint of American crime.

A whole family, the father was injured and died instantly, and the mother was hit by a large shrapnel that expelled the entire intestine. The child in her womb died at that moment.
It is a deplorable condition. We don't know what these aggressive forces, America and Israel, and the brutal aggression want.

America’s crimes against humanity in Yemen is not limited at this fetus, his mother Samira, and his father, who died with him, it is just an example.