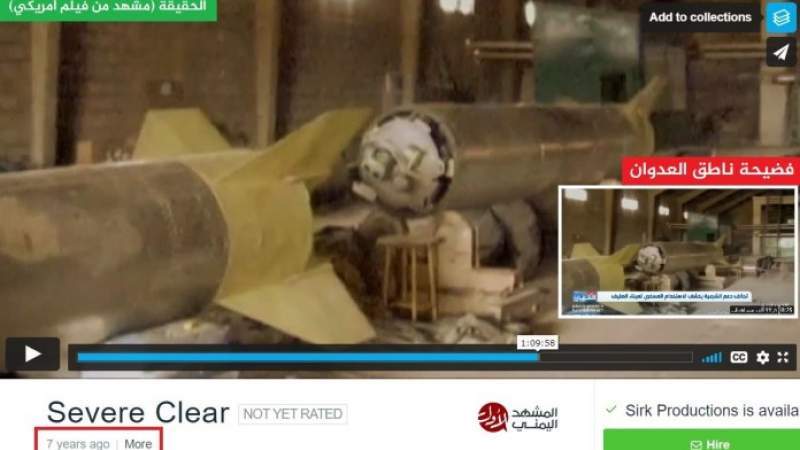 Yemen:  On the field level, in politics and in the media, a series of disappointments befall the Saudi-US coalition on Yemen. The new disappointment this time is a clip from an American movie filmed in Iraq as a Yemeni missile factory in the Yemeni port of Hodeidah.

The coalition has hardly come out of the scandal of the fabricated and faded video that Turki al-Maliki, spokesman for the Saudi-US aggression, used as conclusive evidence of Hezbollah's involvement in Yemen in a press conference held on December 25. However, his clear lie and fabrication turned out - a man who did not speak the Lebanese language appeared in the video, who was presented as a missile expert and a leader in Hezbollah, and a new poster was placed on a laptop. The man made the coalition fall into a lie deeper than the previous one, by presenting a video clip at the press conference on Saturday, January 8, 2022, claiming that it was an Ansarullah missile factory in the port of Hodeidah. It later turned out to be a clip from a documentary film called ‘Severe Clear,’ filmed in 2003 at the beginning of the American invasion of Iraq.

The British daily newspaper The Guardian commented on the fabricated video clip, which was broadcast at the Maliki conference on December 25, as dull, clearly fabricated, and unconvincing. The newspaper pointed out that anyone can come up with a sticker and stick it on a laptop to tell others that his opponent is affiliated with a party, and the fabrication was very clear in the rest of the video clip.

On the other hand, the Lebanese newspapers commented sarcastically on the video that the man, who presented as being Lebanese, for not mastering the Lebanese dialect and for mixing the Lebanese and Syrian dialects, must be held accountable.

What brings together the two conferences of al-Maliki on the 25th of December, and the 8th of this January is the excessive and unrealistic propaganda regarding what was presented later, and the torrent of sarcastic comments that came out after the two press conferences. A Yemeni politician considered that al-Maliki is playing a game of deception on everyone to make them follow his failed and lackluster conferences, which do not even convince his presence or the Saudi interior.

Another likened al-Maliki to the shepherd who lied every time to the people of the village that the wolf attacked the sheep until no one believed him anymore.

Between the two conferences, the US-Saudi aggression fell into a resounding scandal when it claimed that the Emirati ship Rawabi, which was seized by the Yemeni Navy on the 3rd of January, was a ship carrying medical and civilian equipment. However, the Yemeni side revealed the documents that confirmed the ship's multiple trips between the occupied Yemeni ports and the ports of the countries of the coalition, carrying multiple military shipments, including communication vehicles, armored vehicles and various military equipment.

In a conference, al-Maliki was forced not to focus on the issue of the ship, after he threatened at noon on the 4th of January to bomb the ship and target the ports of Saleef and Hodeidah. A statement to him said that his procedures are only hours and turn into reality, but this reality evaporated after Sana’a provided evidence with documents issued by the coalition, photos of the crew’s phones and video that belie the coalition’s allegations of the ship’s civilianness and its operation. In addition, the ship’s captain, of Filipino nationality, admitted entering the territorial waters without prior permission and the failure to respond to the international appeal by the Yemeni authorities, as well as the shipment’s dependence on the Saudi army.

The head of the National Delegation Mohammad Abdulsalam described the revelation of al-Maliki’s lie as a major scandal. “The US-Saudi aggression's spokesman presented scenes that were taken from an American movie as evidence for locating a ballistic missiles factory site in the port of Hodeidah," Abdulsalam wrote on Twitter. “The US-Saudi aggression is trying to cover military failure with artificial, fabricated and ridiculous so called intelligence victories.”

For his part, Abdul Malik Al-Ajri, member of the National Delegation, expected the dismissal of Al-Maliki after this scandal.

“The scandal caused by al-Maliki, US-Saudi Forces Spokesman, is enough to make him disappear from public view, as his predecessor al-Asiri did, Al-Ajri said in a phone call with Al-Masirah channel. "We did not expect the spokesman of the aggression to be so bold as to lie and to resort to scandalous justifications for closing the port. Al-Maliki’s scandal should reach the International Community and the United Nations to expose the allegations of aggression."

Al-Ajri stressed that the US-Saudi aggression are suffering from the failure of their goals and have lost control of Yemen and are seeking through their aggressive behavior to show that they are in control of the situation. He noted that the scandal of the spokesman of the aggression should embarrass the International Community about the closure of the port of Hodeidah.

According to observers, the coalition revealed its catastrophic failure in the intelligence field in the face of Sana’a after seven years of military confusion, and Sanaa's success in securing the pyramid of the military and political leadership of the battle, after the assassination of the martyr President Saleh Al-Sammad.

They added that if the coalition had had a real breakthrough to the hierarchy of the Yemeni battle leadership, it would not have saved time in presenting it and taking it as a pretext for bombing or to prove what it claims about a military relationship with Iran and the Lebanese Hezbollah.

The aggression resorted to media fabrication in an attempt to create a media victory within the countries of aggression and in front of the world as a result of defeats in the military field. It continues to tighten the siege and the economic war in an attempt to afflict Yemeni society and incite it against the government in Sana’a, which suffers as a result of the aggression’s control over the sources of wealth, the strict naval and air blockade, and the suspension of government sector salaries.

In a related regard, the aggression market reveals false slanders towards the port of Hodeidah and Sana’a airport, the lack of real desire on the part of Riyadh and the American coalition to make peace in Yemen, considering that opening these two ports without hindrances will mitigate the impact of the humanitarian crisis to a very large extent, and give an indication of high confidence in moving towards peace.