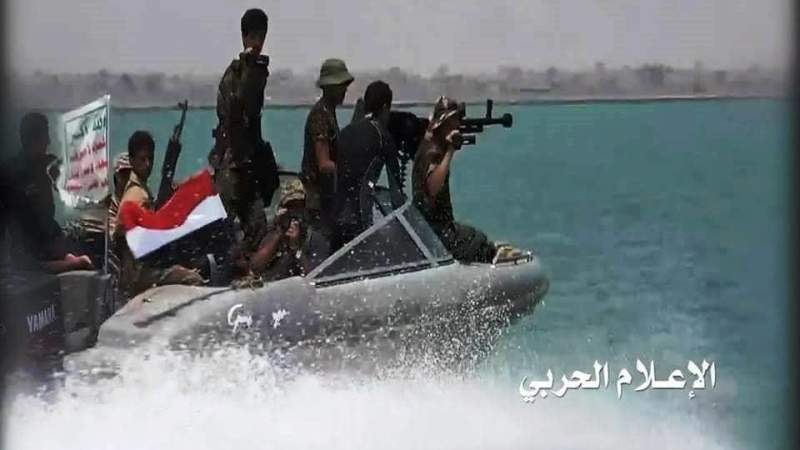 Yemen:   The US Navy has announced the establishment of a "new task force", with allied countries, that will patrol the Red Sea, and its mission has been set "to enhance security in the Red Sea, the Bab al-Mandab Strait and the Gulf of Aden", and more precisely, to "confront arms smuggling to Yemen", which are pretexts for colonial and Zionist ambitions.

This move does not seem surprising, as last March witnessed movements and meetings of the Western-American-Gulf-Zionist military leaders, such as direct official meetings, and meetings on the sidelines of security activities that took place in the UAE, Riyadh and Doha.

The most dangerous of these movements and meetings is the "Negev Summit" that brought together Egypt, the UAE, Morocco, Bahrain and the US in occupied Palestine at the end of last March.

The acceleration of US naval movements in Yemeni waters dates back to November and December of last year, 2021, when it carried out more than one maneuver.

In the meantime, the announcement of these moves came in conjunction with the start of the UN-sponsored campaign in Yemen, and the increasing presence of Yemen in the axis of resistance of the Gulf region and in international waters, including Hodeidah and the Red Sea.

Behind this move are two strategic and tactical factors. The strategic one is related to the US-Zionist policy of the necessity of controlling the sea straits and oil sources. As for the tactical factor, it is related to the doubling of the Yemeni force in the Red Sea, and anticipating the possibility of stopping the aggression in order to consolidate the US presence as a fait accompli, as well as the aggravation of the Western-Russian crisis.

In these circumstances and at the field level, Hodeidah, along with Mocha and Bab al-Mandab, becomes within the circle of the direct US-Zionist military threat. The issue of controlling the Red Sea and the Bab al-Mandab Strait, along with the Gulf of Aden and the Arabian Sea, is among the main motives for the aggression against our country on March 26, 2015.

It may seem strange that the direct American presence, but its direct presence may be chronic by establishing its presence and dedicating Western and Zionism to the Red Sea until the “Arab-Zionist NATO” alliance is completed to carry out the task of controlling the region and ensuring American interests.

It may decrease its direct presence in the Red Sea, but in the current circumstances, the Arabian Peninsula is still very important to it, especially as Russia and China seek to impose a multipolar system and thus redrawing the map of global balances and with it the military deployment. Since its victory over the socialist camp, the United States announced “The Middle East” as its central military district, that it deployed its fleets, and dominated through traitors and puppets.

The US in the Red Sea

An new US-led task force to patrol the Red Sea is a new development in imposing US hegemony on the Red Sea and the Bab al-Mandab Strait. The Associated Press claims that the move comes after a series of attacks by what it called the Houthis in Bab al-Mandab.

“In a macro sense, this region literally and figuratively fuels the world,” Vice Adm. Brad Cooper, who oversees the Navy’s Mideast-based 5th Fleet, said, adding “The area is so vast that we just can’t do it alone so we’re going to be at our best when we partner.”

The AP added that the new task force will include two to eight ships at a time and will see the USS Mount Whitney, a Blue Ridge class amphibious command ship previously part of the Navy’s African and European 6th Fleet.

In this context, it noted that Israeli enemy hasn’t announced plans to join the Combined Maritime Forces though the U.S. Navy has held drills with it, the United Arab Emirates and Bahrain in November, which raises questions about the Israeli role in the patrols, and whether it will be announced or not. The US officer, Brad Cooper, refused to say whether Israel had expressed interest in joining the joint command.

The announcement of joint patrols in the Red Sea comes after nearly two months of major naval maneuvers that included sixty countries and organizations under US auspices, in which the Israeli enemy entity participated for the first time along with the UAE, Saudi Arabia, normalized countries and other Arab countries.

The former "Israeli" Prime Minister Benjamin Netanyahu appeared in 2014 in one of the sessions of the US Congress during the period of Barack Obama warning the US that the Bab al-Mandab Strait in Yemen would fall into the hands of Iran's allies in Yemen, the "Houthis".

This statement was in the context of Israeli pressure on Obama to stop the nuclear talks with Iran, and a sense of concern over the economic waters, rather than an Israeli fear for the future of the general transformations in Yemen after September 21, and considering Yemen has become a country of the axis of resistance.

The Red Sea, and its southern outlet, Bab al-Mandab, is of particular importance in the so-called "Zionist National Security Strategy".

This importance has been embodied by the Zionist movements in the concrete historical reality, since its occupation of the "Umm al-Rashrash" area on the Red Sea in 1948, and it was militarily strengthened after the 1973 war.

The reopening of Bab al-Mandeb to the Zionist movement was one of its conditions in the Camp David deal with the mercenary former prisedent Al-Sadat, and the aggressive Zionist moves continued in the Red Sea, confirming this importance, all the way until the start of the US-Saudi aggression against Yemen in March 2015.