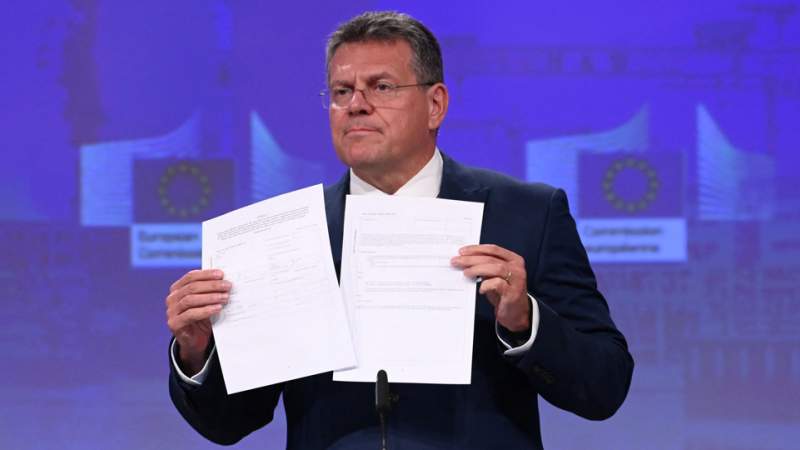 News - World: The European Union (EU) on Wednesday launched fresh legal proceedings against Britain over its failure to implement parts of the post-Brexit trade deal it agreed with Brussels, accusing London of imperiling peace in Northern Ireland.

The European Commission vice president Maros Sefcovic said the commission launched the proceedings because the UK failed to implement the agreement "despite repeated calls" to do so.

He said the move was "illegal" and "extremely damaging to mutual trust and respect between the EU and the UK" and had created "deep uncertainty and casts a shadow over our international cooperation".

"So let's call a spade a spade: this is illegal," he added.

The legislation seeks to change the Northern Ireland Protocol, the part of the deal envisaged to keep the border between Northern Ireland and the Republic of Ireland open and avoid a return to sectarian violence.

Johnson said his government would still prefer a negotiated outcome with the EU to reform the deal, accusing Brussels of failing to engage in London’s concerns about measures to control goods moving from Great Britain to Northern Ireland.

With Northern Ireland remaining in the EU single market, European law must ultimately apply to goods arriving in the territory.

"If the UK doesn't reply within two months, we may take them to the Court of Justice," he said.

Sefcovic also warned the current spat could even escalate into a trade war if London goes ahead with the changes.

"But we are not there yet and we want to solve this issue as the two partners should, through negotiations, looking for the common ground and delivering for the people of Northern Ireland," he remarked.

The spat comes at a time of growing economic hardships for both Britain and the EU amid Russia's military operation in Ukraine, which is into its fourth month now.

The UK, with the inflation rate at a 40-year high of 9 percent in April, is struggling with a huge rise in the price of energy.

Economists say Britain is expected to have the highest inflation among the counties of the Group of Seven (G7) not just this year, but also in 2023 and 2024.