Kremlin: European Leaders Should Push Zelensky to Be 'Realistic' 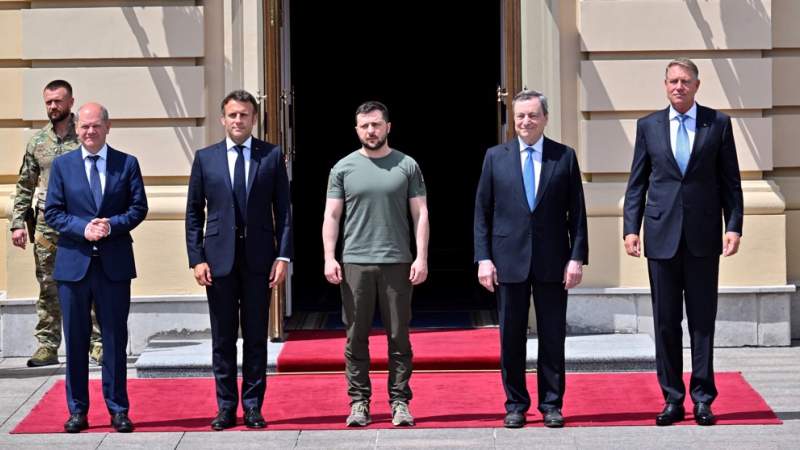 News - World: The Kremlin says it hopes European leaders will not supply Ukraine with more lethal weapons and instead will push Ukrainian President Volodymyr Zelensky to be “realistic” toward the situation.

“I would hope that the leaders would push President Zelensky to take a realistic look at the state of affairs,” Kremlin spokesperson Dmitry Peskov told reporters on Thursday.

The remarks came on the heels of a visit by four European officials from Ukraine.

The trio were joined by Romanian President Klaus Iohannis to meet the Ukrainian president and discuss matters such as Ukraine’s bid to join the EU and exporting more weapons.

The Kremlin has repeatedly warned against Western military aid to Kiev, saying they fan the flames of war and complicate the search for a ceasefire.

Russian officials on Thursday said they were willing to continue peace talks with Kiev, but Ukrainian officials had stalled the negotiations.
Responding to a question about potential Ukrainian hopes of reclaiming the Crimean peninsula, Peskov said: “It's hard to expect anything [constructive negotiations] against this background or otherwise, because everything has stalled.”

Russia's lead negotiator Vladimir Medinsky also said on Thursday that Moscow had received no response to its proposals put to Kiev in previous rounds.

Bilateral negotiations between Ukrainian and Russian sides were held back in March, including a high-profile meeting of delegations in Istanbul, but they have since broken down.

The Russian government is set to blacklist 121 Australian citizens, including defense officials, businessmen and reporters and editors from media outlets, in response to “the growing sanctions of the Australian government, which apply to an increasing number of Russian citizens,” the foreign ministry said.

In a statement on Thursday, the ministry said that all the prominent officials in the list, including Defense Force Chief General Angus Campbell, AI researcher Toby Walsh and The Australian's editor-in-chief Christopher Dore, are barred from entering Russia “indefinitely”.

Russia says that the sanctioned individuals have been trying to promote a “Russophobic agenda” and that the blacklist will be expanded in the future.

Since the start of the Russian military operation in Ukraine, Moscow has announced hundreds of entry bans against the officials and diplomats of other countries in a tit-for-tat move for imposing sanctions on Russia or expelling its diplomats.