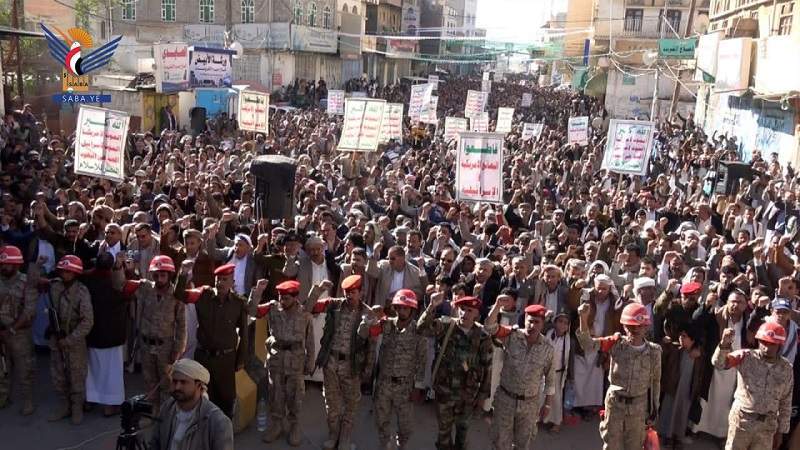 Under the slogan “the siege is war”, the participants in the rallies expressed their anger towards the US economic blockade on Yemen, blaming the US-Saudi aggression for the continuation of the blockade.

In a statement issued, they denounced the continuation of the blockade of the US-Saudi aggression, which contradicts all international and humanitarian norms and laws.

The statement stressed that the blockade is the biggest humanitarian crime to kill the people of Yemen, who are living the worst humanitarian disaster, indicating that true peace is to stop the aggression, lift the blockade, and stop foreign interference.

In the protest, speeches were delivered calling for continuing steadfastness and supporting the heroes of Yemen's army.

Saudi Arabia, backed by the US and its other regional allies, launched a devastating war on Yemen in March 2015. The seven years and half of war has killed hundreds of thousands of people and destroyed much of the country’s infrastructure. People of Yemen  are facing malnutrition, hunger, and famine, which have increased risks of disease and starvation.

In light of its defeats on various front lines and its failure to achieve any of its objectives, the US-Saudi aggression is notorious for its indiscrimination shown by its numerous attacks against densely-populated centers, including markets, hospitals, farms and schools.

In a report on Monday, a Yemeni rights group said more than 3,000 civilians, including women and children, were killed or injured in the airstrikes launched by the Saudi-led coalition against Yemen in the year 2022.

The 'Eye Humanity Center for Rights and Development' said the total number of casualties was 3,083 during last year’s war on Yemen, which included the death of 643 citizens and the wounding of 2,440 others.