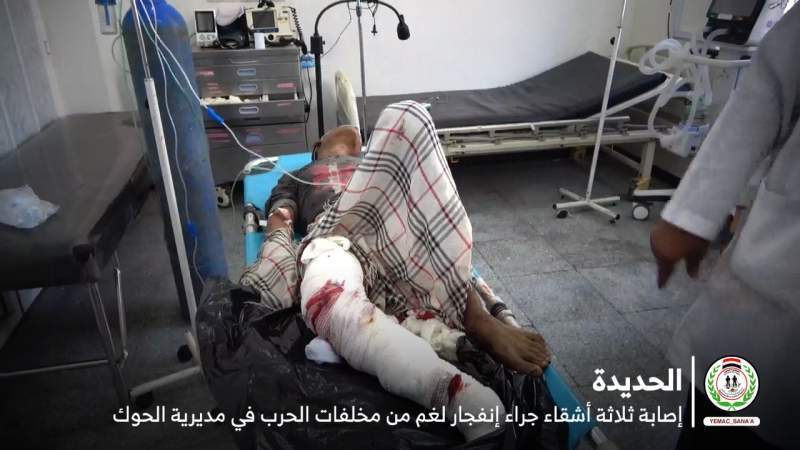 News - Yemen: Three citizens, including a child, were injured as a result of a mine explosion left over from the US-Saudi-Emirati aggression in Al Hawak district of Hodeidah Governorate, the Executive Center for Mine Action reported on Wednesday.

On Tuesday, three citizens were injured and their car was destroyed as a result of a mine explosion left over from the US-Saudi aggression in the Bani Hassan area of Abs district, Hajjah governorate.

The Executive Center for Mine Action has revealed that the number of victims during 2022 was 244 deaths and 490 injuries, including children and women, in several governorates, mostly in Hodeidah.

The death toll from the remnants of US-Saudi aggression during October only reached 18 deaths and 28 injuries as a result of mines and cluster bombs, while it reached 219 deaths and 424 injuries since the beginning of this year.

These tragedies came in light of international silence about the crime of the US-Saudi aggression by preventing the entry of mine detectors, which represents an obstruction of humanitarian work, and deliberate harm to the largest number of Yemenis.

Many areas in Yemen's governorates have been bombarded by US-Saudi aggression with cluster bombs, while many of those internationally prohibited bombs are still scattered among farms and roads, and their victims are in the dozens.

The victims of cluster bombs have reached more than 25,000 civilians since the beginning of the US-Saudi aggression on Yemen.

The landmines and other remnants of the forces of aggression that they planted during their occupation, still pose a threat to the residents of many areas of the districts, especially farms and roads.

In official statistics, 2,500 cluster, destructive, phosphorous and piercing bomb raids targeted nine governorates in Yemen, foremost among which were US bombs like the CBU-87, British bombs like the BL755 and the Brazilian ASTROS II bombs.

Each of these weapons has its own properties and high impacts on humans and environment, which remain life threatening for a long period of time. This shows the scale of the disaster that befell Yemen as a result of these US, British and other weapons.