Boycotting, Sanctions Must Be Imposed Against Israel: American Activists 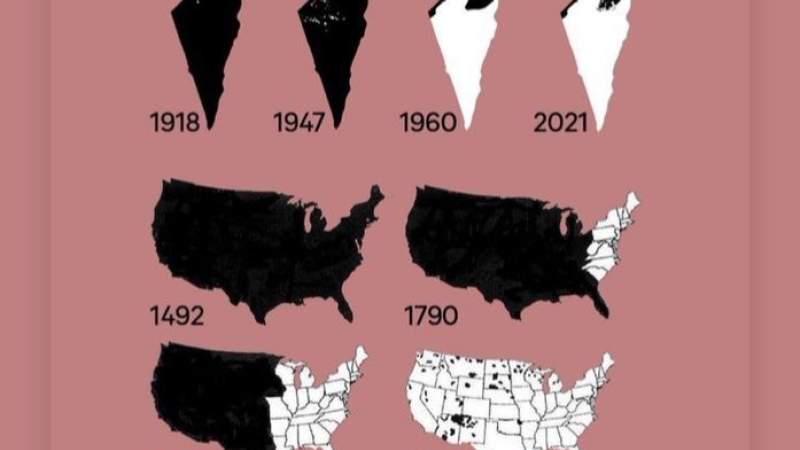 Middle East: A great interaction has occurred with the photo published by the American actress and activist Susan Sarandon on Twitter, which compares the area of   land seized by settlers in Palestine between 1918 and 2021, and another area in the United States that was extracted from its original inhabitants between 1492 and 2021.

Coinciding with Indigenous Day in the United States, the organization “Jewish Voice for Peace” re-published Sarandon’s tweet on its official account on “Twitter”, thanking her for “supporting the campaign to return the land to the indigenous people, confirming the right of the Palestinians to return and self-determination in their homeland.

It is worth noting that “Jewish Voice for Peace” is a left-wing activist organization in the United States, which supports the boycott, divestment and sanctions against Israel.

Dozens of Jewish families fled to Iran at Guatemala airport. Regardless of the lies that the Israeli entity fabricated about the reasons for these families’ flight, it admitted the shocking fact that these fleeing Jews are anti-Zionists, and they sought help from Iran to save them, even though most of them have American citizenship.

The whole world and even the Jews know the reality of the Israeli terrorism, while some Arab rulers talked about the necessity of recognizing the Israeli entity, accepting its existence, and abandoning Palestinian lands and Muslim sanctities?!

Activists republished the tweets of the famous American actor and producer, Mark Ruffalo, who said that hundreds of Palestinians in the Sheikh Jarrah neighborhood in occupied Jerusalem are facing the expulsion from their homes, and that children are being killed by "Israel", calling for imposing sanctions on "Israel" to stop its violations against the Palestinians.

Ruffalo had commented on the recent Israeli bombing of Gaza in a tweet, noting that "the sanctions on South Africa forced it to liberate the blacks there, and it is time for sanctions against Israel in order to liberate the Palestinians."